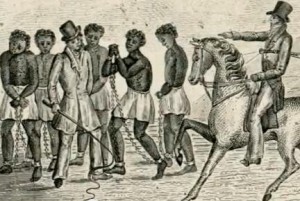 Slavery was legal in New York until 1827.

Yes, ten years after the so-called “American Revolution,” New York was a slave state. According to the first U.S. census in 1790, Albany had a population of about 3,500, of which 572 were slaves and 26 were “free persons of color.” (“History of the 1793 Fire in Albany,” hvmag.com, Feb. 14) All the wealthy families in Albany had slaves.

The slave owners were afraid, and for good reason. In 1741, there was a slave rebellion and fire in New York City. And in 1791, there was the start of the great slave revolution in the French plantation colony of Haiti. There the slaves fought off three European armies and won independence, one of the greatest events in human history.

So when a fire broke out on Nov. 17, 1793, that burned down a large part of downtown Albany, including offices, stores and 26 homes, causing the huge sum of $250,000 worth of damage, the slave-owning city leaders quickly concluded that it had been set by slaves.

All the slaves in the town were subjected to a rigid curfew, rounded up and interrogated. After a few days, the child Bett signed a “confession” that also implicated Dinah and Pompey in setting the fire. They were put on trial on Jan. 6, 1794.

The girls both confessed, throwing themselves on the “mercy” of the court. But of course there was no mercy from the cruel slavers. Pompey pled innocent, but was quickly convicted by the all-white jury. They were all sentenced to death.

Of course, Bett’s statement must be treated with great skepticism. There is much speculation that she was both threatened as well as promised freedom if she would confess. But even that statement explains the motive for the fire was to win freedom for themselves.

Testimony shows Bett stated that Pompey had been approached by two white men. One had a grudge against wealthy Leonard Gansevoort. He promised a valuable pocket watch if he would set fire to Gansevoort’s home.

Bett said that she and Dinah set Gansevoort’s stable on fire rather than his house, so that the family could escape. With that, they showed far more humanity than the slavers. And despite the large amount of damage when the fire went out of control, nobody was killed or injured.

At the time, the one way that a slave could win her or his freedom was to “buy” herself from her “master.” If Bett’s statement was true, then clearly that was their intent — to sell the pocket watch and use the money to free themselves.

After the trial, the girls both announced that Pompey was not involved. Then Pompey “confessed,” saying the young girls were innocent. But it was all for naught. And the white men involved were never even arrested.

Bett and Pompey were both hanged from “Hanging Elm Tree” in downtown Albany. But for Dinah, whom the slavers considered the most “rebellious,” it was different. A ­gallows was built on Pinkster Hill, which is now the location of the New York State Capitol. That is where she was killed.

Why there? Since the early 1600s, enslaved and free Black people in ­Albany took off work together and held a week-long “religious” festival on Pinkster Hill. There they ate and drank, sang, held ­parades and performed African dances.

So the Albany slavers consciously decided to execute Dinah on Pinkster to send a message of fear and intimidation to the Black community of Albany.

They failed. The African community continued the Pinkster festival right through 1811, when the city finally banned it for 200 years.

The Black community never forgot the young people who were lynched. In 1803, nine years after the executions, Absalom Aimwell (probably a pseudonym) wrote a satirical, abolitionist poem titled “The Pinkster Ode.” In it is a stanza dedicated to young Dinah and indeed to every Black woman. Benezet and Ley, two prominent Quaker anti-slavery activists who lived in the mid-1700s, are also mentioned.

“Enough, says I, to Dinah’s shade,

Thou too, wilt drudge no more,
with spade,

Nor hoe, nor pot, nor washing tub,

Nor clean away — nor sweep,
nor scrub.

Sleep on good wench, or only doze,

I’ll not disturb thy blest repose.

“Thy honest soul has wing’d
its flight,

Beyond the reach of tyrant’s sway;

In realms of everlasting light —

To meet good Benezet and Ley.”