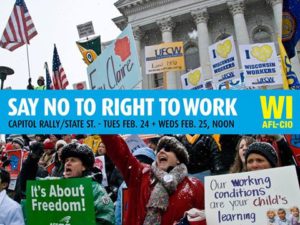 Poor and working people throughout Wisconsin began mobilizing to defeat an anti-worker bill just after they heard right-wing Wisconsin state senators’ Feb. 20 announcement that they would “fast track” a right-to-work (for-less) bill through the Senate. Many organizations called for a protest in Milwaukee on Feb. 23 and the Wisconsin AFL-CIO set protests for the state capital, Madison, on Feb. 24 and 25. (facebook.com/defeatrighttowork)

The senators’ stated goal is to ram through the RTW bill with no public hearings and with a vote by affirmation by Feb. 25. The bill would still need to pass the Wisconsin State Assembly, which is also right-wing controlled. The right wing and Wisconsin Gov. Scott Walker aim to pass and sign the bill in two weeks.

Walker had said repeatedly during his latest gubernatorial campaign that RTW was not his focus. He lied. Immediately after the senators’ announcements, Walker said he would sign the RTW bill. Like other right-wing legislative and gubernatorial attacks on the people during Walker’s administration, ramming through the RTW bill is part of an organized, coordinated campaign. It’s a class war paid for by the Bradley Foundation, the Koch brothers, ALEC, the Mackinac Center, Wisconsin Manufacturers and Commerce, the Greater Milwaukee Committee, Milwaukee 7 and other Wall Street and Pentagon interests, with the banks and bondholders taking the lead.

The RTW bill is just one in a series of vicious attacks on organized labor and communities throughout Wisconsin. With Act 10, Wall Street declared war in 2011, virtually eliminating collective bargaining for public sector workers and imposing wage cuts on state workers in the form of higher co-payments for state health insurance and pensions. Since then, austerity measures in Wisconsin have diminished or wiped out safety nets for the people, such as unemployment insurance; food stamps; protections for women, people of color, and lesbian, gay, bisexual, transgender and queer people; and senior care.

This year’s legislative session, which began in January, is a virtual scorched earth campaign against the working class and oppressed peoples in Wisconsin. Bills propose to dismantle and semiprivatize the University of Wisconsin system, strip world-renowned environmental policies and regulations, cut public education funding, implement drug testing for anyone receiving public benefits and more. Every sector of working-class Wisconsin is facing severe austerity with these bills — with people of color throughout the state but especially in Milwaukee to receive the worst effects if these bills are implemented.

The labor, community and student organization — the Wisconsin Bail Out the People Movement — issued an appeal in December calling for a labor-community general strike to defeat the RTW legislation, based in part on the successful historical examples of general strikes in the United States in Minneapolis, San Francisco and Toledo in 1934; in Oakland in 1946; and the “11 Days of Action in Ontario” from 1995 to 1998. The appeal gives detailed examples of how to build for a general strike and includes a clause from the United Auto Workers constitution that “in states of great emergency” the president and a two-thirds vote of the International’s executive board have the authority to call a general strike.

“Unions are not a ‘special interest’ apart from our suffering communities and all workers — unorganized, retired, young, immigrant or unemployed. Along with uniting all the unions, we must bring in the many community groups affected. Labor must make their problems our own. ‘Social unionism’ can take a big leap forward. While proceeding to authorize the general strike, unions and community groups should convene a huge assembly of the people in Wisconsin. Starting now, all union halls and resources should be available to fight RTW and to support community struggles, especially ones led by Black, Brown and poor white youth, most of whom are unemployed or low-wage workers.”

“Community organizations, church leaders, people of color fighting back against police abuse, women, the LGBTQ community, the education community, foreclosure victims, the unemployed, low-wage workers, the Occupy Wall Street movement, immigrants and all others who are under attack by the international austerity assault must be brought together to prepare for the general strike. Demands must be shaped to make the largest majority of the people of the state understand that we are fighting for everyone. In a state where local and state politicians only represent the 1%, an assembly of the 99% should have commanding authority.”

For updates and how to join the struggle to beat back RTW: ­wisaflcio.typepad.com and wibailoutpeople.org