Madison, Wis.,  Feb. 28 — At today’s protest of thousands at the state Capitol in Madison, Stephanie Bloomingdale, secretary treasurer of the Wisconsin AFL-CIO, called on all workers and community members to come to the Capitol this coming week to stop the Wisconsin State Assembly from voting for a “right-to-work” bill.

The deceptively named RTW bill really means the right-to-work-for-less, because it would seriously weaken workers’ unions by making it hard for them to collect dues. 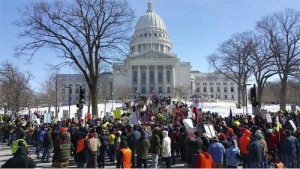 On Feb. 25, the Wisconsin State Senate passed an RTW bill. The bill must also be passed by the majority of the State Assembly before going to Gov. Scott Walker, an unabashed enemy of labor who has said he’ll sign RTW legislation if it comes before him. The Labor Committee of the Assembly will convene at 10 a.m. on Monday, March 2.

“We are not going anywhere. We need to stay all day and all week,” said Bloomingdale. After she spoke, Phil Neuenfeldt, president of the Wisconsin AFL-CIO, said, “Let’s pack the gallery. Let’s pack the Capitol.”

Many labor and community supporters participated in today’s protest, including Fight for $15 activists trying to raise the minimum wage, youth, seniors, women, the LGBTQ community, environmentalists, faculty, students and the Black Lives Matter movement. Chants of “What’s disgusting? Union busting” and “Shut it down” were heard on the streets and inside the Capitol.

Speaking inside the Capitol, Eric Upchurch II of the Young, Gifted and Black coalition said, “We are in solidarity. There are so many forms of state violence and ‘right-to-work’ is one of them. Mass incarceration and poverty are state violence. We have to see the commonality of our struggles. We can and will stand together and fight.”