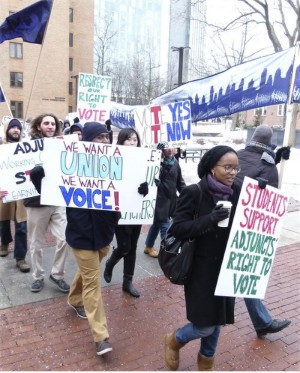 Philadelphia — Temple University adjunct faculty, tenured and nontenured, as well as students marched for justice on Feb. 23 despite frigid weather.

Half of Temple’s faculty are adjunct part-time professors, at-will employees (subject to firing at any time with no reason required) with only semester-long appointments, no affordable health care options and no job security. Their salaries average $3,900 per class, while Temple tuition costs each student $18,774 per year. The Temple Adjunct Organizing Committee wants to win the right to bargain over issues of job security, pay, class size, class cancellations, benefits and professional advancement.

Hundreds of the university’s adjunct faculty petitioned the Pennsylvania Labor Relations Board in December for the right to vote on joining the Temple Association of University Professionals union, which already represents 1,400 full-time faculty members.

In a Feb. 17 letter to the Temple News, the TAOC wrote, “Unfortunately, Temple administration is delaying the process because they don’t respect us. Provost [Hai-Lung] Dai continues to send misleading and offensive emails to adjunct faculty discouraging us from unionizing. His actions show that he regards us as nothing more than cheap labor.” A hearing before the PLRB is scheduled for March 19 in Harrisburg, Pa.

The Philadelphia protest kicked off many actions scheduled to take place all across the country during National Adjunct Action Week. That was called after the Feb. 25 National Adjunct Walkout Day was initiated last October.

Adjuncts made up 43 percent of U.S. college faculty in 1975, but that number has risen to about 70 percent today, according to the American Association of University Professors. Many part-time faculty earn less than $30,000 a year, receive no health insurance and often teach at more than one school to get by. n