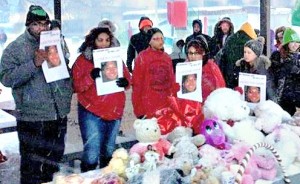 It has been over three months since Cleveland police brutally murdered two people in one month — 12-year old Tamir Rice and before him Tanisha Anderson.

Courtney Drain, an activist in the fight against police violence, was arrested on Feb. 9 at a Cleveland City Council meeting for holding up a sign calling for justice for Tanisha Anderson. Anderson was killed by Cleveland police on Nov. 20 after her family made a 911 emergency call for help getting their daughter to the hospital. Instead police held her down on the ground, suffocating her.

The people scored a huge victory on Feb. 23, when Drain had his ticket for disorderly conduct thrown out in Cleveland court. He received no fine for court costs. The judge asked how it could be disorderly conduct when there is no law against holding up a sign at Council meetings.

On Feb. 21, Sabrina Fulton, mother of murdered teen Trayvon Martin, spoke to an overflow crowd at the Cleveland Public Library. Fulton had spent the morning with Samaria Rice, mother of Tamir Rice. When the two women entered the hall, everyone leapt to their feet to applaud the women for their incredible courage. Fulton encouraged everyone to stay active and never stop fighting for justice.

Feb. 22 was the three-month anniversary of the murder of Tamir Rice outside a Cleveland recreation center. Despite the fact that this horrific crime was caught on camera, the guilty police are still working and collecting their paychecks.

Ignoring the driving snow and falling temperatures, more than 150 people participated in the outdoor vigil, called by Cleveland’s “Candlelight Vigil for Tamir.” Samaria Rice spoke to everyone and told the crowd about Tamir, her youngest son. Over 10 police squad cars observed the peaceful protest, meaning they were not patrolling Cleveland’s roads, which were littered with accidents due to the whiteout lack of visibility and icy conditions. Even with people trapped in cold cars with possible injuries, cops give priority to repression. n