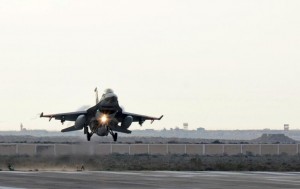 Egyptian planes struck Libya on Feb. 16 following Islamic State operatives’ brutal execution of Egyptian Coptic Christians in Libya. Egyptian President Abdel Fattah al-Sisi then appealed for military intervention by the “international community.” The call suggests that Al-Sisi, who headed a military coup against elected Egyptian President Mohamed Morsi in July 2013, wants a renewed imperialist-led campaign in North Africa, with Libya’s political crisis and the presence of IS as a pretext.

The Egyptian airstrikes killed mainly civilians. Washington annually subsidizes Cairo with over $2 billion in taxpayer funds, most of it for Egyptian military joint cooperation agreements with the Pentagon and CIA.

The evidence of the last four years shows that another aggressive Pentagon-NATO operation in Libya would be just as disastrous as the outcome of the regime-change war in 2011. The ongoing conflict inside Libya has spread instability throughout other regions of North and West Africa, creating conditions for the escalation of foreign occupations from France as well as the U.S. in nearby Niger, Mali, Burkina Faso, Chad and other states.

Since the 2011 U.S.- and NATO-sponsored counterrevolution against the government led by Col. Moammar Gadhafi, there has been an escalation of internecine violence in Libya, including the targeting of Christians and their churches. Under Gadhafi’s Jamahiriya system of government before 2011, the country was guided by a secular ideology based on popular committees and mass organizations.

The 2011 Pentagon-NATO bombings lasted for over seven months, during which NATO coordinated disparate rebel groups that marched along the trail established through aerial bombardments across strategic areas of the country. This imperialist-led war destroyed Libya as a nation-state. It left no viable political, social, military, cultural or legal institutions within the country that could stabilize Libyan society.

The corporate media and U.S. government officials often overlook or distort the role of the CIA, the Pentagon and NATO in destabilizing Libya. This process of destabilization continues through the presence of intelligence and military assets inside the country, and it continues with the Egyptian intervention.

Another series of bombing by IS in the town of al-Qubbah in the east of Libya on Feb. 20 killed over 40 people. The BBC reported that day: “Three bombs exploded, targeting a petrol station, a police station and the home of parliamentary speaker Agila Salah, a security source told the news group. According to an online statement, IS fighters said they struck in retaliation for Egyptian air strikes.”

Washington has also conducted military maneuvers in West Africa ostensibly as a show of support in the increasingly regional fight against Boko Haram. Nonetheless, elements in the Nigerian government have said the role of Washington has been less than helpful in the conflict which has killed over 10,000 people and dislocated millions. (Allafrica.com, Feb. 11)

Since 2009, Boko Haram has carried out a military campaign against the central government through attacking and occupying large swaths of territory in the northeast of the country. The rebels have also carried out operations in neighboring Cameroon, Chad and Niger.

Reuters on Feb. 16 reported, “Chad launched a U.S.-backed counter-terrorism exercise on Monday [Feb. 8] with 1,300 soldiers from 28 African and Western countries, billing it as a warm-up for an offensive against Nigeria’s Islamist insurgent group Boko Haram. The ‘Flintlock’ maneuvers unfolded as Chad and four neighboring states prepare a task force to take on Boko Haram, the biggest security threat to Africa’s top oil producer Nigeria and an increasing concern to countries bordering it.”

The Christian Science Monitor noted on Feb. 18 the international character of the U.S.-led operations, saying, “It includes counter-terrorism forces not only from the U.S. but from other Western countries and a number of African militaries including several of the armies that have pledged to support Nigeria in its battle against the jihadists.”

Nigeria was scheduled to hold national elections on Feb. 14 and 28 for the presidency, parliament and local government offices. On the recommendation of Nigeria’s armed forces, the Independent National Electoral Commission postponed the voting until late March and early April, saying the lack of security in war-impacted areas of the country precluded the holding of a free and fair vote.

The Nigerian military, along with forces from the impacted regional states, have reported counterinsurgency operations where hundreds of Boko Haram fighters were killed. It is nevertheless unclear if these offensive operations are adequate to break Boko Haram’s military capacity.

Although Nigeria’s government is closely allied with the imperialist states, including the U.S., there are tensions between Washington and Abuja. The U.S. is no longer the major importer of Nigerian crude oil, and it is reported that petroleum industry trade between the two countries has been severely curtailed.

At present, India is the largest purchaser of Nigerian oil. The drop in oil prices, which provide Nigeria with over 90 percent of its foreign exchange earnings, has prompted an economic crisis in the country. This crisis reflects Nigeria’s dependence on oil exports for maintaining the national economy at its current level.