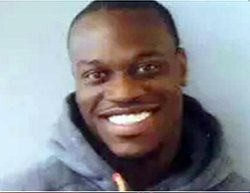 Philadelphia — Organizers of a “Philly after Ferguson” town hall meeting at the Catalyst for Change Church on Feb. 11 was billed as an opportunity for dialogue on community-police relations “in the post-Ferguson era.” Dozens of protesters in the largely African-American audience used the event to demand police officials on the panel release the name of the officer who fatally shot Brandon Tate-Brown.

On Dec. 15, Tate-Brown, 26, was headed home around 3 a.m. when police in Philadelphia’s Mayfair district pulled him over for allegedly driving without his headlights on. Police claim they saw a handgun in the center console of his car and asked him to get out.

According to police accounts, Tate-Brown complied but struggled with the officers before running back toward his car. Claiming they felt threatened, the officers shot Tate-Brown in the back of his head.

To date, police have refused to release the name of the officers involved or surveillance video from a gun shop that may have caught the encounter.

Repeatedly chanting, “Who killed Brandon Tate-Brown?” people at the meeting, including Tanya Dickerson, his mother, and even some community-based panel members demanded that police release the officer’s name as well as the video.

Deputy Police Commissioner Kevin Bethel and Thomas Nestel III, chief of police for Philadelphia’s transit system, were both on the panel, along with Kelvyn Anderson, head of the city’s civilian police oversight board; Daily News Editor-in-Chief Michael Days; activists from Philadelphia’s Black Lives Matter movement; and others.

Bethel was repeatedly challenged as members of the audience demanded transparency from the police. Derision greeted his statement that the department could not release the officer’s name out of “concern over cop safety.”

Nestel was denounced for posting racist remarks on Twitter in support of a pro-police rally held at the site where Tate-Brown was killed.

Dickerson, given an opportunity to address the gathering, spoke of her pain on first learning that her son had been killed from the morning news on her way to work. She condemned the police for not having the courtesy to notify her.

“Brandon was tried, judged and condemned by police, not a judge. So who judges the police, who holds them accountable?” Dickerson asked the panel.

“Right to know” requests to obtain surveillance footage that might show the incident were denied by police on Feb. 6. Greg Brinkley, a private investigator hired by Brown’s family, said they plan to reveal more information on the case soon: “Circumstances surrounding Brandon Tate-Brown’s death are not consistent with the police account.”

Dickerson also suspects that if video exists to support the police version, they would have released it to shut her up.

Surveillance video that did lead to indictment

Surveillance video contradicting the police version of a case surfaced in February when a grand jury arraigned two Philadelphia policemen for the May 2013 beating of Najee Rivera, a Latino.

The assault fractured an orbital bone in Rivera’s face and left him with numerous lacerations on his head. He was charged with assaulting the officers and resisting arrest.

The officers who lied to cover up their attack on Rivera might have gotten away with it, except that Rivera’s girlfriend canvassed the neighborhood where the incident took place and discovered security camera video that disputed the officers’ accounts. Charges against Rivera were dismissed.

The grand jury charged officers Sean McKnight and Kevin Robinson each with eight separate charges for the alleged assault and subsequent cover-up.  Both officers received citizen complaints since being hired, and both were found to have previously violated the department’s “Use of Force” policy.

Without public oversight there is no guarantee that if video obtained by police disputes their version of events, it will ever see the light of day — as with Tate-Brown’s fatal shooting.

Dickerson and her family made it clear they are not giving up. “The police have the power of finance behind them. I have the power of strangers, coming together and organizing for change. The activists and organizations made it quite clear that we are serious; it is not going away.”

On Saturday, Feb. 21, the 50th anniversary of Malcolm X’s assassination, a major march calling for “Justice by Any Means Necessary” will take place in the Mayfair area, starting at 6600 Frankford Ave. at 2 p.m. For more information, contact [email protected]