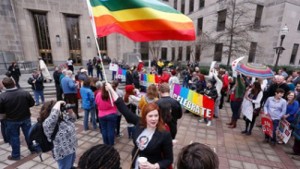 Outside the Jefferson County courthouse, Feb. 9, in Birmingham, Ala.

The number of states that deny couples of the same sex the most basic human right to marry continues to shrink. Only 13 states are left. By federal court order, on Feb. 12, Alabama became the 37th state to begin issuing marriage licenses to same-sex couples.

On Jan. 23, U.S. District Judge Callie Granade struck down Alabama’s marriage ban, which voters passed in 2006. State officials then asked the U.S. Supreme Court to stay Judge Granade’s ruling and prohibit county courts from issuing licenses until the high court rules on marriage equality cases from four other states later this year. The Supreme Court denied the stay on Feb. 9.

Moore gained notoriety in 2002 for refusing to obey a federal court order to remove a huge monument to the Ten Commandments from the grounds of his courthouse. The Ku Klux Klan of Mississippi has issued a “call to arms” to “white Christians” to rally behind Judge Moore for “resisting [the] Imperialist Communist Homosexual agenda,” reported the Southern Poverty Law Center’s Hatewatch blog, on Feb. 10.

On Feb. 12, Judge Granade ruled against Moore, stating that all probate courts must issue same-sex marriage licenses. At last count, all but 17 of Alabama’s 67 counties were honoring Granade’s order. This includes Mobile County, where Kim Gebauer and Regina Gebauer stayed all day for four days at the probate court until the clerk opened the window and gave them a license. The window had been closed after Moore’s order, making it also impossible for heterosexual couples to wed.

Given how much bigotry against lesbian, gay, bisexual, transgender and queer people still lingers in the Bible Belt South, couples such as the Gebauers are showing tremendous courage when they make their commitments in the public eye.

In April, the U.S. Supreme Court will hear marriage rights’ cases from Ohio, Michigan, Kentucky and Tennessee, with a ruling expected in June. The Alabama win, the latest in a string of victories, has the LGBTQ movement even more convinced that same-sex marriage will soon be legal throughout the country. That may well be the case, but the movement and its allies should be prepared to rise up if a court decision comes down otherwise.