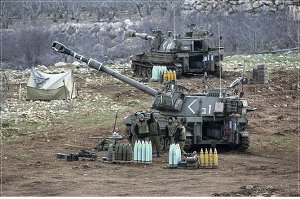 Israeli soldiers stand next to a mobile artillery unit near the border with Syria in the Golan Heights.

“How can you say that al-Qaida doesn’t have an air force? They have the Israeli air force,” Syria President Bashar Assad told an American reporter. (“Assad: Israeli strikes in Syria benefit al-Qaida,” jpost.com, Jan. 25)

In retaliation for this unprovoked attack, on Jan. 28 Hezbollah forces from Lebanon fired anti-tank rockets at an Israeli column in northern Israel, killing two soldiers and wounding seven. In the ensuing battle, a Spanish U.N. soldier was also killed.

Also in response to the Israeli attack, Hamas in Palestinian Gaza organized a strong solidarity demonstration with Hezbollah. Some demonstrators even breached the walls of the U.N. compound in Gaza. Hamas officials said their action “reaffirms Hezbollah’s right to respond to the Israeli aggression, especially following the attack in Quneitra.” (CNN.com, Jan. 28)

At first glance, it may seem strange that Israel, supported and armed to the teeth by the U.S., would launch an attack on allies of the Assad government in Syria when Syria is waging a fierce defense against invading forces of the Islamic State (ISIL). The U.S. is waging its own air campaign against ISIL in both Syria and Iraq. Hundreds of U.S. troops are being sent to the region to train Syrian anti-government militias to fight ISIL.

But of course there is nothing strange about it at all. The U.S. still sees the Assad government in Syria as an obstacle to its dominion over the oil-rich Middle East. Regime change in Syria is still a top item on Washington’s agenda. So it doesn’t complain when Israel attacks Hezbollah, an ally of the Syrian government.

Of course, this attack also meshes with Israeli Prime Minister Benjamin Netanyahu’s re-election campaign in the Zionist garrison state. Continued war against its Arab neighbors and the Palestinian people is the foundation of Israel’s existence. This war, which has cost so many lives and caused 9 million people to flee their homes, according to the U.N., is not in the interest of the Jewish people, but it has won the enthusiastic support of Wall Street and its minions in Washington.

It is time for all progressive people to stand in solidarity with the Arab people in the Middle East against these U.S.-Israeli criminal attacks!