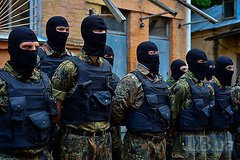 The U.S. government says it is discussing — if it is not already a done deal  — sending $3 billion in heavy arms to the Kiev government in Ukraine, which was installed by a U.S.-inspired coup last February. Sending these weapons will, at a minimum, bring more suffering to millions of people in Ukraine.

Ukraine used to be a republic of the Soviet Union and most of the people in the east speak Russian. At a maximum, more U.S. intervention could provoke a war with Russia, with the unspeakable suffering and destruction that could entail. This must be stopped.

Workers World has supported the resistance movements of the Lugansk and Donetsk People’s Republics, located in southeastern Ukraine. The working people in the resistance are volunteers, defending their territory from the Kiev regime’s offensive. They have popular support and have  recently been making gains.

The Kiev government was put in power by a coup backed by U.S. and European Union imperialism and depends on openly fascist and neo-Nazi militias. This regime plans to join NATO and accept NATO bases that would provoke Russia. This is a threat to working people in both Ukraine and Russia, and the people of southeastern Ukraine know it and will fight.

Add to the two generals eight “think-tank” militarists in the Chicago Council, who have just released a report demanding weapons for Kiev. Led by Strobe Talbott, the eight are all anti-communist intellectuals who built Cold War careers battling the Soviet Union. Unsatisfied by the collapse of the USSR and the privatization of the economy that followed, they now advocate U.S. policies to destroy Russia as a potential competitor.

We call upon all progressive and anti-war people in the United States to reject these war-mongers and fight against any delivery of U.S. military aid to the Kiev regime’s conscripted army in Ukraine. Demonstrate this opposition in social media, in assemblies and in the streets. Spread these opinions and publicize these actions to progressive and anti-war forces in all NATO countries.

Don’t let them put your world at risk. Tell Obama if he wants to spend $3 billion, use it to bail out and rebuild Detroit. For starters.

No U.S. arms to Ukraine!