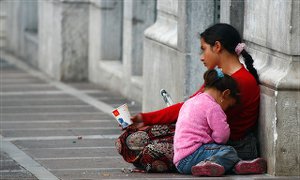 A woman begs with her child in Athens, Greece. Some 70 percent of Greek
children live in jobless households.

The austerity program imposed on Greece in 2010 by the European Commission, the European Central Bank and the International Monetary Fund has had a devastating effect.

Greece is a developed European country of some 11 million people, including 1 million immigrants. As in the U.S., 80 percent of its workers are in service industries, especially tourism in Greece. But it has a significant industrial sector and its merchant navy is the largest in the world, followed by Japan.

Greece, which occupies the southern part of the Balkans, has the largest economy in that region and has attracted many economic migrants from other Balkan countries. Between 1995 and 2005, testifying to a sharp labor shortage, workers in Greece put in the most hours per year of any European nation. (Groningen Growth and Development Centre, Oct. 6, 2008)

It has also attracted refugees fleeing war and repression in the Middle East.

The 2008 capitalist recession and the austerity program imposed on Greece have had major impacts on the rates of poverty, unemployment and economic growth.

Poverty: In 2009, one year before the imposition of austerity, less than 3 percent of the population had incomes below the poverty line. By the end of 2013, 44 percent were living in poverty. (Public Policy Analysis Group, Athens University) Some 70 percent of Greek children live in jobless households. (Greece Reporter, May 29, 2014)

Unemployment: In 2010, the IMF predicted that unemployment would peak at nearly 15 percent by 2012. But one year later official unemployment had climbed to 25.6 percent and by 2014 it stood at 27.7 percent.

Economic growth: The IMF in 2010 also predicted that the economy would “follow a V-shaped pattern” — a short sharp contraction (depression) followed by a quick recovery and steady growth after 2012. Instead, Greece’s gross domestic product had declined by nearly one third by the end of 2014. This is on a par with what the Great Depression of the 1930s did to the United States.