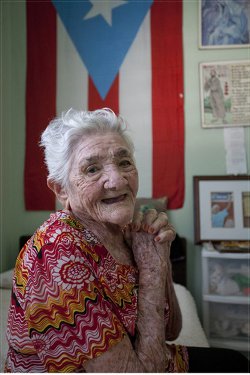 Known simply as “Isabelita” or “Doña Isabelita,” throughout her life, Isabel Rosado was an icon of the struggle for Puerto Rican independence and sovereignty. When, on Jan. 15, her remains were sown in the soil of her beloved hometown of Ceiba, thousands of Puerto Ricans shared their many memories of her. They had come from the islands — Puerto Rico is an archipelago made up of Isla Grande (Puerto Rico), Vieques and Culebra, plus many uninhabited islands — and from abroad. Rafael Cancel Miranda, nationalist hero and former political prisoner, and Alicia Rodríguez, also a former political prisoner, led the mourners.

For over a century, Isabel Rosado had witnessed the process of colonization and participated in the struggles of the Puerto Rican people for their total emancipation. That was her life. She was an extraordinary woman, who evolved from an individual to become one with and live in solidarity with the people until the last moments of her life. Above all, she was one with the struggles to free the political prisoners who fought against colonialism.

Her latest project was to demand freedom for Oscar López Rivera. We recall her image with pictures of this political prisoner, whom imperialism still holds after more than 33 years in custody, simply for advocating Boriken independence.

Isabelita was born on Nov. 5, 1907, in Ceiba, a coastal town in the northeast of the largest island, just nine years after the 1898 Yankee invasion. At the University of Puerto Rico, she studied to become a teacher, like many women of that time, and worked at this job mainly in rural schools.

The Ponce Massacre of Palm Sunday, March 21, 1937, had the greatest impact on Isabelita and united her from then on with the anti-colonial nationalist struggle. This atrocity occurred at the start of a march of members of the Nationalist Party to protest the imprisonment of its leader, Don Pedro Albizu Campos. Under the orders of the then Yankee governor, Blanton Winship, a massive contingent of police made an all-out attack on the protesters, leaving 19 dead, including 14 nationalists, and over 200 injured. The outrage that Isabelita felt impelled her to join the party and become a faithful collaborator of the Maestro (Albizu Campos).

Imprisoned three times, she spent more than 11 years behind bars. The first time was in 1950 for violation of Law 53, also known as “the Gag Rule.” This was the first anti-sedition legislation passed in Puerto Rico, patterned on the anti-communist Smith Act in the United States. This law was finally repealed in 1957.

Under this gag rule, any pro-independence activity was prohibited, including the simple possession and exhibition of the Puerto Rican flag. After the 1950 Jayuya Uprising, Isabelita was arrested. Thanks to the sympathy shown by her people and her students, her sentence was reduced to 15 months in prison and the loss of her job in the public sector.

The second imprisonment in 1954 was the longest. It followed the armed attack on the U.S. House of Representatives by Nationalist Party members Lolita Lebrón, Irvin Flores Rodríguez, Rafael Cancel Miranda and Andrés Figueroa Cordero. Isabelita had gone to New York City with the mission of organizing tasks leading to a revolution in Puerto Rico, including attacks on key positions in the U.S.

After she returned to the island some days later, police assaulted and fired on the Nationalist Party headquarters. Besides Isabelita, Albizu, Don Pepe Sotomayor, Torresola Doris Pérez Roura and Carmine Pérez were arrested there. Dona Isabel and Carmine Pérez were sentenced to 17 years in prison for defending themselves and for weapons possession. Through a writ of habeas corpus they succeeded in getting out after 11 years.

During that long incarceration, Isabelita became known for helping and defending the rights of women in prison.

A special mission in Vieques

Albizu had assigned Isabelita the task of driving the U.S. Navy from the island municipality of Vieques, a task that marked her nationalist activity.

The photo that swept the world in 1979 became famous. It showed the 72-year-old woman with her small body trapped under the weight of a large policewoman who was handcuffing her face down on the sands of the municipality of Vieques for “invading” the marina in an act of civil disobedience. Years later, in 2003, the U.S. Navy finally had to pull out of Vieques.

Thanks to Isabelita, the historic role of Gen. Antonio Valero de Bernabé Pacheco has become known widely. This Puerto Rican fought for the liberation of several Latin American countries and alongside Simón Bolívar during the war in Peru. That his statue was erected in the Puerto Rican town of Fajardo is due to the tireless work of Isabel Rosado Morales.