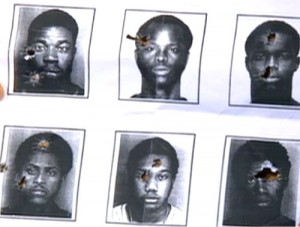 “Why is my brother being used for target practice?” asked Valerie Deant after she found his picture with a bullet hole in it. Police had left the Medley Firearms Training Center before Ms. Deant arrived with other members of her National Guard unit.

Local police Chief J. Scott Dennis announced that no disciplinary action will be taken against the officers. He said that shooting at pictures of African Americans “is vital for facial recognition skills.” (The Root)

People with disabilities are often targets of police terror. Cops claimed that Mr. Vassell had a toy gun.

Ernest Vassell’s sister, Claire Harding, told WFOR-TV, “That’s no reason for you to kill somebody!”

There was no reason either for Cleveland cops to kill 12-year-old Tamir Rice, a Black youth with a toy gun, on Nov. 22 last year. The killer cops then tackled Tamir’s sister, who was trying to help her dying brother.

“Robocop” Brian George didn’t need a reason to kill Nicholas Naquan Heyward Jr. on Sept. 27, 1994. The 13-year-old honor student was playing with a toy rifle in the Gowanus Houses of Brooklyn, N.Y.

North Miami Beach is a small town with about 43,000 people. The population is more than three-quarters Black or Latino/a, with a large Haitian community.

These terrorists in blue need to be disarmed. Power to the people!