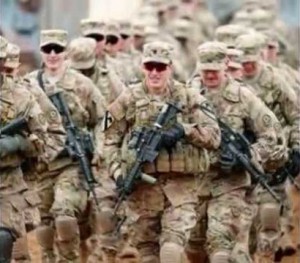 With an air of absolute cynicism, the Pentagon announced on Jan. 16 that it will send 400 combat troops and 600 other personnel to the Mideast to train Syrian so-called “moderates” to fight forces of the Islamic State (ISIL). Congress has allocated $5 billion to fund this program.

The U.S. war machine will set up training sites in Saudi Arabia, Qatar and Turkey, three repressive regimes that are among the most willing U.S. agents in West Asia. This increases the already existing training program run by the CIA.

Not long ago, the troops now supporting ISIL were part of the same U.S.-backed campaign to overturn the government of Bashar al-Assad in Syria and install a new regime completely under the thumb of U.S. imperialism. The U.S. labeled the groups it supported as “democratic forces,” calling their campaign of terror and atrocity “a popular uprising.”

But Washington has lost control of some of its hired guns in Syria. ISIL forces not only refused to follow the CIA’s orders, they attacked the U.S.-installed Iraq regime, seized oil wells, and even looted banks and threatened Iraq’s Kurdish region. Now the U.S. government calls ISIL its enemy — along with the Assad government.

Why? With the Mideast holding the vast bulk of the world’s oil supply, the number one mission of the U.S. military is to keep the flow of oil to its refineries, the flow of cash into its bank vaults. Navy ships and planes are on constant patrol in the Persian Gulf. U.S. military bases dot the region. Washington arms the most repressive regimes to the hilt. And, of course, the Zionist regime in Israel remains the prime garrison of “friendly” military force to U.S. imperialism in the Middle East.

All of this force is designed to do one thing: prevent the impoverished people of the region from seizing control of the vast wealth lying right under their own feet. ISIL threatens to disrupt this flow of wealth to Wall Street, even though its reactionary ideology harms solidarity among the oppressed peoples of the region.

Washington’s new “training” strategy makes one thing crystal clear — the forces the U.S. is arming and backing to destroy the Syrian government are not for “democracy.” They are foot soldiers for the oil companies in the Middle East, to be used to fight any target chosen by the Pentagon and Big Oil.

To build solidarity with the peoples of the region, progressives and anti-war forces in the U.S. need to stand up against the new war plans from the White House and Pentagon.

U.S. out of the Middle East!