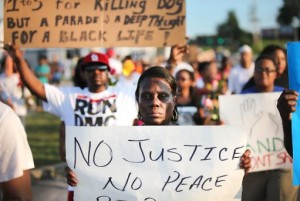 An upsurge in mass demonstrations and rebellions across the United States portends much for developments in 2015. The federal government and ruling class have not seriously addressed the underlying factors associated with the rise in police killings and other racist incidents.

The profound disconnect between the ruling Democratic and Republican parties and the African-American masses was starkly revealed last year when voter turnouts were low, while tens of thousands of people demonstrated in the streets against police terrorism and the racist criminal justice system.

These militant protests and urban rebellions were not planned by the mainstream Civil Rights organizations, but grew out of the objective conditions facing tens of millions of oppressed people.

Entering 2015, we see that right-wing ideology dominates the political superstructure of the U.S. Completely ignored are the growing demands by millions for decent wages, adequate housing, quality education, an end to police abuses and the cessation of military hostilities abroad.

The Democratic Party, which appeals to the workers and oppressed during election years seeking their votes, is not advancing any concrete programs to alleviate the suffering and impoverishment of growing numbers of people. Unemployment, underemployment and poverty rates remain extremely high. The decline in the labor participation rate conceals the real magnitude of the problem.

A Pew Research Center study entitled “Black unemployment rate is consistently twice that of whites” was issued on Aug. 21, 2013, to mark the 50th anniversary of the March on Washington. It reported, “In 1954, the earliest year for which the Bureau of Labor Statistics has consistent unemployment data by race, the white rate averaged 5% and the black rate averaged 9.9%. Last month, the jobless rate among whites was 6.6%; among blacks, 12.6%. Over that time, the unemployment rate for blacks has averaged about 2.2 times that for whites.”

Such statistics illustrate that despite the passage of the Civil Rights Act of 1964 and the Voting Rights Act of 1965, fundamental issues of jobs and income remain unresolved. The refusal of the federal government and the corporate elite to enact any national jobs program means that these unemployment figures will continue at the same rate or become even more disparate between African Americans and whites.

The U.S. poverty rate sharply reflects these disparities. Overall, it stood at 15 percent in 2013. When race is considered, whites had a poverty rate of 10 percent, while the rate was 27 percent for African Americans — 17 percent higher. The Latino/a poverty rate was 24 percent, just three points below African Americans. (These figures are posted under “Poverty Rate by Race/Ethnicity” at the Henry J. Kaiser Family Foundation blog, using data issued in March 2014 by the U.S. Census Bureau.)

Consequently, it is not surprising that African Americans are expressing mass opposition to the status quo. The struggles of this oppressed nation in North America have paved the way for all significant contemporary democratic and working-class movements.

A “white backlash” against the demonstrations demanding justice for Michael Brown, Eric Garner, Tamir Rice and other victims of racist police violence is already in evidence. Police organizations, backed up by politicians, are decrying any public sympathy expressed toward African-American and other oppressed people who are being gunned down in the streets by the cops.

These developments are taking place 50 years after the Rev. Dr. Martin Luther King Jr. and other members of the Southern Christian Leadership Conference went to Selma, Ala., to escalate an existing struggle for voting rights. Since 1965, many African Americans have been elected to public office and have entered job categories from which they had been previously excluded.

However, the fundamental contradictions between the majority of African Americans and the capitalist ruling class remain. Most African Americans have been negatively impacted by the economic system’s restructuring over the last several decades.

The housing crisis and the deterioration of the public sector, including in municipal affairs and education, have disproportionately robbed jobs, incomes, homes and essential services from tens of millions of the oppressed living in cities and suburbs.

Ferguson, Mo., where the rebellions and mass demonstrations erupted in response to the police killing of Michael Brown on Aug. 9, represents a microcosm of African-American life in the U.S.

As voting rights are besieged in many states, the Supreme Court in 2013 struck down the enforcement provisions of the 1965 Voting Rights bill. The U.S. Congress has yet to take any meaningful action to restore access to the basic right to vote, which is ostensibly a byproduct of any bourgeois democracy.

Malcolm X said on Jan. 7, 1965, in a speech before the Militant Labor Forum in New York, that 1965 would be one of the bloodiest years on the racial front in U.S. history. His life was taken on Feb. 21. Then on March 7, “Bloody Sunday,” state and local police attacked hundreds of Civil Rights marchers on the Edmund Pettus Bridge, after they left Selma on their way to Montgomery, the Alabama state capital. The Watts Rebellion began on Aug. 11. Also, the Lowndes County Freedom Organization, the original Black Panther Party, was founded in Alabama, in the aftermath of the Selma-to-Montgomery march.

Independent political action by the African-American masses must lead to new organizational forms and alliances. As a system, capitalism has run its course. Therefore, a major political movement aiming for national liberation and socialist reconstruction is required.