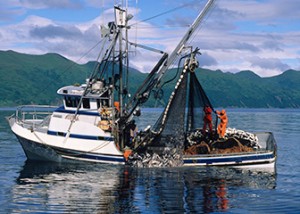 Fishing, the most dangerous job

Facts are very stubborn things. Very often they contradict what is considered general knowledge. Which raises the question: What is general knowledge? Isn’t it the opinions and attitudes fed constantly to the public through the dominant media? It takes big social upheavals to unseat the widespread lies that conveniently justify the status quo.

Take the question of dangerous jobs. We hear a lot these days about certain occupations being very dangerous. I won’t tell you which ones. You already know, if you are alive and watch television or read the corporate newspapers.

So let’s look at the official government figures on the 10 most dangerous occupations in the U.S. in 2011, the most recent year of data released by the Bureau of Labor Statistics.

Here they are, in descending order, starting with the most fatalities per 100,000 workers in that occupation. Also listed are the total numbers of deaths that year in that category, as well as the median salaries for the type of work.

Did you notice something about this list? Something missing?

Well, actually a lot of people did notice. On the website where these figures can be found (bankrate.com), the Comments section of the site turned into a huge debate over the cops. Some comment contributors were indignant, claiming that somehow the figures weren’t right because the cops have very dangerous jobs. But others answered them with logic and sometimes with humor.

A person with the username “zs” wrote: “Police officers keep this country from tearing it’s self [sic] apart each and every day.”

“Bill Owen” replied to “zs”: “Right, cause the only thing stopping your neighbors from eating your family and raping your dog are the two cops at the donut shop.”

Many commented on how the police generally make much more money than the workers in the listed occupations, plus get good pensions, health plans and other benefits. And of course, that’s not counting the off-the-books “tips” that many cops extort from small businesses.

Here’s a point that needs to be added to this discussion: The police really don’t belong in this list, either as number 20 or 30 or even lower. Because the others are workers. They work under the most dangerous conditions to produce goods and services that people really need.

The police are not workers. On the contrary, they are anti-worker. Their primary function is to preserve the unjust capitalist order, which exploits and oppresses workers. The police are particularly brutal and murderous against those who are additionally oppressed by virtue of their color or national origin.

Now that there’s a vibrant and courageous movement in the streets against police murders, led by youth of color, more people are challenging the false ideas promoted as “general knowledge.”