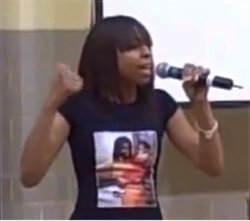 On what would have been her 37th birthday, on Jan. 9, family, friends, well-wishers, supporters and organizations came together with great enthusiasm and dignity to celebrate the indelible life of Samiya “Goldii” Abdullah Jamal, daughter of Wadiya Jamal and Mumia Abu-Jamal, in Philadelphia.

Very sadly, the deeply beloved daughter of the Jamals died on Dec. 17 after a long struggle against breast cancer. She leaves behind two lovely daughters, affectionately nicknamed Dolly and Puddy, 11 and 4 years old respectively.

In her too-brief yet remarkable life, Goldii had also become an accomplished musician, rapper with a message and strong advocate for political prisoners, especially on behalf of her world-famous and falsely imprisoned father, Mumia Abu-Jamal, starting at age 4! Goldii had recently earned a master’s degree with honors in school and mental health counseling from the University of Pennsylvania as well.

The event, organized by MOVE; the International Concerned Family and Friends of Mumia Abu-Jamal; Goldii’s mother, family and friends; unsung community activists, residents and concerned individuals; and local artists and musicians, was held at the historic Kingsessing Recreation Center in the evening and was very well-received. The Free Mumia Abu-Jamal Coalition (New York City) was also in attendance.

Well over 100 people gathered for this “Celebration of Life and Fundraiser” for the Goldii’s children. The slammin’ food, atmosphere, spoken-word performances, testimonials and dynamite music were most befitting for the occasion, and included the participation of large numbers of children of all ages as well.

Participants included Tim Hicks; Jade and Ice, with two backup singers; and a poet named Sekou, who gave a moving tribute to Goldii, Dolly and Puddy and expressed deep love to their mom. An on-the-spot portrait painting of Goldii was created and a beautiful blanket for the girls with a picture of their mom on it was unveiled, to the prolonged applause of the audience for each presentation. The Jamal sons played key roles in making this homage a critical success.

In spite of her grief and loss, Sister Wadiya Jamal was most gracious to all well-wishers and sympathizers, as she acknowledged their presence and contributions as well as her own pain.

While a sad occasion in some respects, the celebration of the life of Goldii was a moving tribute to a most courageous and loving woman, whose high regard for life, justice, humanity and her dad is best expressed in her own words:

“He is an innocent man and the commonwealth has always known this, but being too Black, too smart and too strong. … The government will silence anyone that possesses the power to open the minds of the people.” Right on.

Hagins is a co-chairperson of the Free Mumia Abu-Jamal Coalition (NYC).