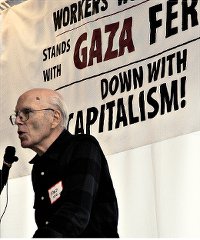 Excerpts from the talk given by Fred Goldstein at the 2014 Workers World Party National Conference in New York City.
WW photo: G. Dunkel

This is a very difficult period for the working class and the oppressed. But this difficult period also offers great potential and opportunity for revolutionaries. I think it is safe to say that the capitalist system in all its aspects has not been so visibly rotten and so universally harmful to the workers since the depths of the Great Depression of the 1930s.

Every day you read about new casualties of the profit system. In Detroit tens of thousands of people are without water because the city is using the treasury to pay off bondholders instead of guaranteeing water service.

I read about a young woman worker and mother, Maria Hernandez, who was accidentally asphyxiated in her car. She was working three jobs at Dunkin Donuts in New Jersey. She had to drive from Newark to Harrison to Linden every day just to make ends meet. She never had a real night’s sleep and she died in a Dunkin Donuts parking lot when she dozed off between two of her three jobs. Her situation is common.

The bosses have taken technology to new depths. Mary Bolender was at home in Las Vegas when her 10-year-old had an asthma attack with a 103 fever. She jumped in her Chrysler van and it would not start. Why? An auto-lease firm in Mesa, Ariz., had shut her car down by remote access because she was three days behind in her payments.

Such examples are not unusual. They represent the life of the working class.

Racist police brutality and killings are at epidemic levels. Ferguson is the straw that broke the camel’s back. Mass incarceration, closing of women’s health care clinics, summary deportation of millions of immigrants, not to speak of the disastrous climate change brought on by the fossil fuel industry — you name it.

Why bring all this up? It is not new. We have written about and participated in protesting virtually all of these injustices. The reason to bring it up is that all the evils and injustice engulfing the workers are caused by the system of capitalist exploitation, the irresistible lust for profit, the global search that lies deep within the system. And it is easy to show it.

We communists know it. And we also know that the only way out for the workers is to destroy capitalism and establish socialism — a system based on planned production for human need and not for profit. But our knowing it is not worth much if the workers do not know it. And this lack of knowledge is a great danger. It is as dangerous as the capitalist crisis itself.

I want us to ask ourselves: What is the most important thing that we can do, given our size, given the state of capitalist crisis and the great difficulties that the workers are going through? Given the circumstances and our limited resources, what is the most important contribution we can make to the working-class struggle, now and in the future?

Multiply the ranks of WWP

The answer in my opinion is to grow the party. To multiply the ranks of Marxist, communist revolutionaries who are clear about the path forward, who are clear that the liberation of the working class and the oppressed from the nightmare of capitalism lies in the class struggle, which must end up in the establishment of socialism.

So we must expose capitalism and promote socialism whenever and wherever we can. Since we are already a struggle party, since we gravitate to all resistance movements, we have the activity side covered. It’s the ideological war that must be strengthened. This must be done thoughtfully, artfully and sensitively, but it must be done.

Since the collapse of the USSR and Eastern Europe, there has been a global retreat of Marxism, an adaptation to the ideological supremacy of the ruling class. Discussion of the contradictions of capitalism and the need for socialist revolution has been largely confined to the meeting halls and publications of a limited number of small groups.

It is completely counterproductive to the aims of revolutionaries to withhold Marxist knowledge from the workers in struggle, those who are suffering at the hands of parasitic, predatory corporate bosses and financial sharks at this moment in the history of decadent capitalism — when it is more openly hostile to the interests of the workers and oppressed in every sphere of life.

And in this struggle there are many misguided analyses and many opponents who will advocate everything from workers’ cooperatives to local self-sufficiency to democratizing capitalism, etc.

But we know that there is no third way beyond socialist revolution. If you want to build a new society, it must be built not in the mind, not on the pages of utopian schemers, but on the existing social and economic foundation. And capitalism has laid the foundation for socialism. The revolution just sets that foundation free from the constraints of capital, from its use as a profit-making system, and allows it to be used by the workers for their own well-being.

The foundation for socialism is an economic structure that can create enough for everybody. Why is that important? Because socialism is a society based upon good human relations. And the most important thing to promote good relations between people is to see that everyone has what they need to live and does not have to find personal security by getting rich at someone else’s expense.

In a millionaire’s home, no one fights over food. Why? Because there is an abundance of food there. Tension over food only prevails in poor households where the supply is limited. If someone takes too much, someone else suffers.

That goes for society, too. It was the genius of Karl Marx that in the middle of the 19th century he was able to see that capitalism — and its profit motive — contained within it a never-ending drive to increase the productivity of labor. And that this drive would end up in the capacity to create abundance — enough for everyone. But he also saw that this capacity to create enough for everyone would, under capitalism, always be used for further enslavement and accumulation of profit.

And that is where we are today.

This advanced economic foundation, which could materially support the production of abundance and leisure time, is being used by capital to create mass poverty. Under capitalism you cannot live if you cannot sell your labor to some boss.

Under socialism, there are no capitalists, no bosses, no capitalist wage slavery. But under capitalism, as technology makes workers more productive, the tendency to overproduction increases. If goods or services cannot be sold at a profit, then the bosses have less need for labor.

Under socialism, that contradiction is broken. Workers will be the collective owners of the economy. Production, services, the availability of culture and sports, and many other features of life will be planned according to the needs of the people. Capitalism has created supercomputers and networking that will make it possible to discover people’s needs and to translate that into economic life — and that also includes ensuring the universal availability of art, music, theater, poetry and all cultural forms. And the workers will have the leisure time to enjoy them.

But in order to promote socialism, a word must be said about the USSR. This is a subject for hours of presentation and discussion. I will only say this:

The moment you embark upon a discussion of socialism, you don’t have to wait long for questions about how socialism failed and the Soviet Union showed it.

I want to read a quote from Marx from the “Critique of the Gotha Program.” This is probably the single most important work in understanding the problems of socialism.

Discussing what would happen after the revolution takes power in an advanced capitalist country such as 19th-century England, Marx wrote:

“What we have to deal with here is a communist society, not as it has developed on its own foundations, but, on the contrary, just as it emerges from capitalist society; which is thus in every respect, economically, morally and intellectually, still stamped with the birthmarks of the old society from whose womb it emerges.”

Marx was talking here about the difficulties that would have to be overcome by communist society in its early stages, precisely because the prejudices and practices instilled in the generations raised by capitalism would still exist. And the economy and economic organization would have to be transformed.

But, as Lenin later said, capitalism first broke at its weakest link — in backward Russia, where capitalism and the capitalist class were weak and the legacy of feudalism in the countryside was strong. The peasantry and much of the working class were largely illiterate and industry was scattered in a few centers that were geared to the West.

Every socialist revolution since, whether it was in China, Korea, Vietnam or Cuba, came into existence under even more difficult conditions.

Not only was abundance not even remotely possible, but to make matters worse, imperialism never gave any country that aspired to socialism one minute’s peace. It surrounded them, invaded them, blockaded them, and did everything possible to keep socialism from succeeding. This, of course, inevitably created great internal contradictions in the USSR.

So socialism did not fail. Every socialist country had to deal with the legacy of capitalism and imperialism in an environment of permanent warfare — economic, political, military, diplomatic and so forth. The successes of the USSR were based on the socialist measures, nationalization of property, planning the economy, guarantees for the workers, etc. The failures were due to the legacy of capitalism, feudalism and imperialist aggression.

So anyone who tells you that socialism failed has not studied history and has bought the false line of the bourgeoisie.

This much we do know: The foundation for socialism is ripe in the U.S. Our job is to liberate that foundation from the greedy grasp of the capitalist class, destroy its state and set up a socialist society.