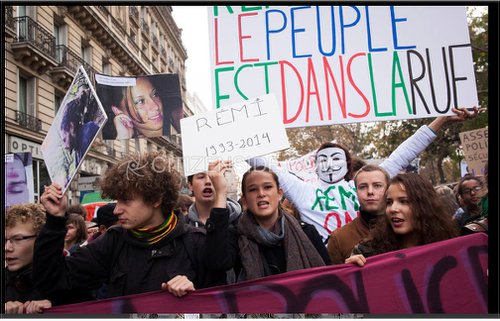 Paris youth say: ‘Rémi: The people are in the streets!’

Rémi Fraisse was killed by an “offensive grenade” used by French cops Oct. 26 during a protest against a dam being built in Tarn, a rural area northeast of Toulouse. Fraisse, 21, was part of the encampment by a local militant group with the slogan “As long as there are bodies, there will be no dam.”

The encampment was supported by significant left groups in France — the Party of the Left, the Greens and the New Anti-capitalist Party. Their candidates in the first round of the 2012 presidential vote got close to 15 percent.

Fraisse’s death sparked a storm of protest, both immediately after it took place and as news spread. High school students all over France marched, not only to commemorate Rémi’s courage but also to protest police violence.

While French cops had avoided killing protesters, they have been harsh and hard with the Black and Arab immigrant communities and working-class youth of all nationalities, killing even nonprotesters with relative impunity.

The cops facing off with the protesters in Tarn were members of the anti-riot unit of the gendarmerie. The gendarmerie are a national, militarily organized police force controlled by the minister of the interior. They are extensively trained with all sorts of light weapons; the ones in Tarn had night-vision goggles.

At the session of Parliament after Fraisse was killed, some deputies from the Party of the Left called for the resignation of Minister of the Interior Bernard Cazeneuve, the prohibition of “offensive” grenades and an investigation around the circumstances of Fraisse’s death. Their charges were extensively aired on French television.

Adding heat to the charges made in Parliament were attacks by masked men on Party of the Left leader Jean-Luc Mélenchon, Green Party leaders and José Bové, head of a peasant union opposed to the dam and a deputy in the European Parliament. The attacks took place during substantial demonstrations held in Testet, the nearest village to the dam, on Oct. 24 and 25.

Cazeneuve fairly quickly banned the use of concussion grenades, while Sègolene Royal, minister of the environment and economic development, suspended work on the dam indefinitely. It came out that only 20 farmers would have benefited from the dam.

Major demonstrations raising both police violence, as exemplified in the killing of Fraisse, and the ecological consequences of this dam and other projects in the south of France, also took place in Toulouse, Nantes, Marseilles and Paris. Some of the demonstrations were attacked by the police; others were banned. (New York Times, Nov. 1)

A large number of demonstrations started in November, mainly involving high school youth. They often showed an amazing degree of militancy, forcing the cops to back down. They put their videos and photos on sites like citizenside.com/fr, which reported on 69 actions, from cities like Paris to smaller towns like La Rochelle and Nimes.

One slogan stands out in the pictures: “The state is a killer.”

A video from Nantes starts with 300 to 500 youth facing off against 30 to 40 gendarmes, armed with batons, shields and hand-held pepper spray cans. The cops advance on the youth, who are yelling “Assassins, assassins” and banging garbage can covers. When the number of youths start to swell and they begin to flank the cops, the latter retreat — slowly but under steady pressure. Even a youth who is sprayed three or four times keeps advancing.

While these protests were growing in intensity, the French newspaper Le Monde released a transcript of cops talking about Fraisse’s death and how to muffle its impact. The transcript raises the question that an order telling the cops to act with “firmness” wasn’t local, so where did it come from?

The mass movement against police violence in France is putting a lot of pressure on the French government, which is maneuvering to keep the wraps on and keep destroying the environment to satisfy the greed of the rich.