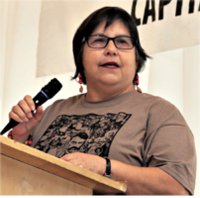 Not too long ago, the movement in this country hardly remembered, much less commemorated, May Day. In 2005, however, a wonderful grouping of labor activists and communists sought to revive May Day and organized a Union Square demonstration.

May Day 2005 was a great start in flexing working-class muscle: a call to the movement to break the stranglehold of the Democratic Party and to orient instead toward the struggle; hit the streets instead of the voting booths.

But it took the uprising of migrant workers in 2006 to thoroughly revive May Day.

What the bourgeoisie had tried to erase from class history was brought back by the very sector that had fought and died for it in the 1800s. Migrant workers once again took center stage in the class struggle and reminded the capitalist class that it is the workers who have the real power in society.

Some 200 cities were part of the Great American Boycott of 2006 — “El Gran Paro Americano.” Over 2 million workers participated in demonstrations on May Day in what some say was the largest single day of protest ever in the U.S.

But this was not just a demonstration. Construction sites were shut down. Schools were empty. Ripe fruit spoiled on the land, restaurants had no workers, and the machines in meat processing plants were turned off.

Some reports indicate that Wall Street lost billions in profits.

This was a general strike, not against an employer but against the capitalist government.

Everything that Sam Marcy wrote in “High Tech, Low Pay” and everything we have written since came to light that spring in the first major uprising of low-wage workers.

“Capitalism at a dead end” means enormous overproduction with increased exploitation abroad and less need for cheap labor. It means massive incarceration of Black and Latino/a youth, lower wages for all, and the drive of migrants underground or out of the country altogether.

Now, why do I bring this up? Why review May Day 2006? Well, much can be said about the immigrant struggle then and now.

As Comrade Holmes wrote in his document, “In all likelihood, migrant workers will start the revolution.” This point alone demonstrates why we can never exhaust the discussion on immigrants.

But the main reason I raise these important developments is because Mexican migrants were central to the 2006 uprising. At this very moment, the very workers who helped revive May Day are again making history at U.S. imperialism’s front door.

As we meet, the possibility that the Mexican government could be shaken up in a way not seen since the early 1900s is very real, including the possible resignation of the current president, Enrique Peña Nieto. Mexicans are declaring ¡Ya basta!” The disappearance of 43 students from the Ayotzinapa School in Iguala, Guerrero, is the drop of water that has shattered the oppressor’s vase.

It evokes the events of 1968 at Tlatelolco, where hundreds of students were brutally murdered in Mexico City. That incident is forever burned into the minds of young revolutionaries around the world.

Forty-three young people studying to become teachers are now missing. They may be dead.

But from Mexico to the U.S., throughout Europe and Latin America, and as far away as Australia, demonstrators are demanding: “¡Vivos los llevaron, vivos los queremos!” “Alive they took them, alive we want them back!”

The Ayotzi students were political activists, rooted in the community, part and parcel of the Mexican working class. Revolutionary slogans and pictures of Che Guevara adorn their campus.

They are the drop of water that shattered the vase because the masses have had enough. At least 100,000 Mexicans have died since the so-called war on drugs began in 2006. Thousands more are missing. Extreme repression against unionists, journalists and activists accompanies miserable economic conditions.

Mexicans are dying from hunger. Or from protesting. Decapitations and bodies hanging from bridges are all too common.

Never to be forgotten are the women of Juárez, where hundreds if not thousands of women have been tortured and killed in the shadows of the maquiladora factories. No one has been punished for this femicide.

We must blame U.S. imperialism for all of this. In 2006, the Bush administration passed the Mérida Initiative, an aid program described as a “counternarcotics, counterterrorism and border security initiative for security forces to fight drugs.” The U.S. has spent approximately $3 billion to fund this war on the people!

The Mexican state has evolved into a narco-state doing the bidding of the ruling class in the most crass, brutal way. Mexico is running red from the blood of the people.

But it is also red with righteous rage. Government offices have not been occupied, they have been burned down. Major airports in Acapulco and in Michoacán, prime tourist areas, have been shut down for hours by protesters. Marches are taking place throughout the country and schools shut down as students walk out day after day.

The country is becoming ungovernable. The governor of Guerrero was forced to resign and the Iguala mayor and his wife have been arrested, not just for corruption but as part and parcel of the narco state.

With this kind of corruption, who can be counted on to find justice for the 43 students? No one but the masses.

Developments in Mexico demand our complete attention. If the ruling class was worried about an Arab Spring, imagine their response to an “Arab Spring” at their front door?

What imperialism has done to sabotage and undermine revolutionary developments in Cuba, Venezuela, Ecuador and Bolivia will pale in comparison to what they will do in Mexico. Mexico is on fire. And this is a fire Washington will stop at nothing to put out.

But the people are picking up arms. They are beating up cops. And winning! In many areas, the people have formed their own police and have run drug dealers out of their communities. This is real community control!

It also sounds like emerging dual power, a situation we must monitor as it is very fluid.

There appears to be a call for a massive shutdown on Thursday, Nov. 20, just five days from now.

The families of the 43 are traveling throughout Mexico in caravans right now. They plan to end their caravan in Mexico City on Nov. 20. This could be a huge day of struggle right in our front yard.

Finally comrades, let me return to the point that Comrade Holmes made in his document: “In all likelihood, migrant workers will start the revolution.”

It could very well be immigrants, it could be women, it could be the people of Ferguson, it will certainly be youth!

We can agree that there are important lessons right now that cry out for the party’s intervention.

Mexico demands of us to imagine a near future when we should shut down an airport. For example, LaGuardia Airport, to protest the Veolia corporation in defense of the Boston bus drivers.

I know, conditions are not quite there. I am saying, however, that this should be our party’s orientation for the future.

And we might not be able to shut down LGA, but we can all try to go to Boston on Nov. 24!

Mexico demands of us to demonstrate our internationalism on an even higher level. It urges us to collectively develop an advanced strategy to link our struggles. To continue to fight for left unity despite any differences.

Workers are under attack, economically and socially. And youth in particular are being gunned down in unprecedented waves.

How about developing an international campaign — “From Gaza to Ferguson to Ayotzinapa: Hands up, don’t shoot!” — and demand that the police be disarmed?

How about that the next caravan we organize be one on immigration and mass incarcerations together? If debtors’ prisons are back — and they are — then how about a campaign to break the chains of ankle monitors?

Isn’t it possible that another more advanced strike can happen some May Day in the future on the heels of 2006? Will we be part of it? Hell, yes!

World events cry out for the Party and all revolutionaries in the U.S. to come together immediately and deepen our influence among the working class. To figure out basic transitional demands as well as higher political ideological work.

In the words of the Mexican movement, “Fue el estado” — it was the state behind the missing Ayotzi students. It is the colonialist settler state that occupies Palestine. It is the racist occupying state that allows killer cops to walk free in Ferguson. It is the state that we revolutionaries, young and old, must target, fight against and crush.

Mexico and the immigrant movement show us that the imperialists can militarize the border all they want, but they will never stop the rising tide of revolution on our doorstep and in the barrios and neighborhoods of this country.

Gaza, Ferguson and Mexico are the flames of revolutionary class upheaval. Let us fan those flames.

From Gaza to Ferguson to Ayotzinapa: Hands up, don’t shoot!