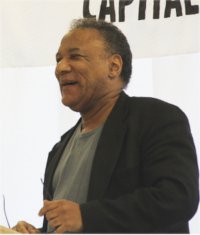 Excerpts from the talk given by Larry Holmes at the 2014 Workers World Party National Conference in New York City.
WW photo: Brenda Ryan

Comrades, I want to start by saying a word about the immense Boston struggle.

In the relationships between capital and labor at any given time there is a norm. We all know what it has been: givebacks, concessions, two-tier wage levels.

From Detroit to Philadelphia, everywhere, the workers have been decimated. But there are exceptions, and the Boston school bus drivers are one. They have somehow managed for almost 40 years to get good contracts. It hasn’t been easy. They have been on strike; their leaders have been fired.

In addition this union has a worldwide reputation for internationalism, for what it says about Palestine and imperialist war, and in solidarity with Black and Brown communities fighting racist police terror. There is a reason for this. This union has communists in it. It has many great people and a good piece of Workers World Party in it.

We were there at the beginning. We helped organize the union more than 40 years ago, at the time of a struggle to desegregate the Boston schools. The racists were violently trying to stop that. An anniversary is coming up on Dec. 14 of the 1974 March Against Racism. This wonderful school bus union grew out of that struggle.

So is it any wonder that Veolia wants to get the party out of there, wants to get radical influence out of there by hook or crook? The workers know this. They are smart and know what is in their interest. They know that not just Steve Kirschbaum is charged. They know it is the union. And if Veolia is able to separate the party from that union, it is highly unlikely the union will remain the same. The workers support and love our comrades, but that is not the fundamental reason. They know their own class interests and are fighting for themselves.

The struggle is entering a very intense period. The trial opens Nov. 24. We need to be there with the workers. Veolia has now intensified its hostility with respect to contract negotiations. It is firing workers in the yard and harassing the workers. It is coming to a showdown over the contract, over rehiring the fired workers. And the school bus drivers are getting ready. But they can’t do it alone, comrades.

The bus drivers are here to remind us that if they are to prevail, they have to consolidate union support not only in Boston, but everywhere.

If a strike happens, it is going to get national attention. They have to consolidate the Black and Brown community, which they already have relationships with. And we have to help them. They are here to thank us, but they are also here to remind us that they need our help. We have to make sure that we don’t let them down, comrades.

Why is the Ferguson struggle so important? Many young Black and Brown people are massacred by vicious, racist cops. Those crimes are just as bad as what happened to Michael Brown on Aug. 9. But in Ferguson there was a rebellion that has never ended.

There was also a military occupation. There were huge anti-austerity protests this week in Brussels. The state was so afraid they brought out water cannons and tear gas.

But in Ferguson they brought out tanks, armored personnel carriers, state-of-the-art military weapons. They were aimed at unarmed protesters, like in Gaza, Iraq or Afghanistan.

In some places the repression against Occupy Wall Street was very vicious, but it didn’t come close to this. This is what the capitalist state does when the oppressed rise up.

In many ways the labor movement, the progressive movement, let Ferguson down, in my view.

They should have embraced this rebellion, come to its support — no holds barred. Shut down cities, occupy whatever they could. There should have been work actions in support of this. Labor did a lot more than it usually does when there are rebellions, and that is good, but it wasn’t decisive. And the progressive movement went about their business pretty much as usual. The climate march was necessary, but you wouldn’t know there was a Black rebellion in the center of the country.

The decision of the grand jury is coming down any time. We have more than 50 locations around the country where there are going to be militant response demonstrations, including right here in metropolitan New York.

Can we be the agent for drawing more political and social forces of our huge class into defense of Ferguson? We’ve got to figure it out. Maybe we can do something on the Martin Luther King holiday in January. Right after that is Black History Month. February 21 marks the 50th anniversary of the assassination of Malcolm X, a revolutionary. Maybe these dates will help us raise the level in terms of this struggle in Ferguson.

About a year ago I wrote a document on low-wage workers. Two days ago workers pulled the first sit-down strike in a Walmart in Los Angeles. Some were arrested. Things are now heating up. I said the entrance of low-wage workers into the struggle represents millions: there are 4 million fast food workers, 2 million Walmart workers and probably 18 to 20 million in retail, most of them low-wage workers. These are enormous organizing drives. The biggest in history, whatever their problems.

But why isn’t labor calling on the progressive movement? We have a Workers Assembly fighting to put a referendum for $15 an hour on the LA ballot; we have the Baltimore Workers Assembly. We are waiting for the union, in this case the Service Employees, to call on the movement. Do they think the workers can do it alone? No matter how brave the McDonald’s or Walmart workers are, in this period of capitalism at a dead end, with reorganization of the working class on a global basis, workers in any specific place or industry need more to win.

The fast food workers are planning a strike on Dec. 4 and another, bigger one in the spring. They want to bring McDonald’s to the negotiating table, which would be incredible. If they do that, all the other fast food chains would come along. Millions of workers and unemployed people would come and occupy those stores — if you called on them. There is a vast, untapped human reservoir of working-class and radical support for low-wage workers, but nobody is calling on it. We’ve got to begin to change this.

We’ve got to be able to offer our own suggestions on how to massify the struggle, how to bring more social forces into the working class.

I was asked to write a document for this conference. The title is “What is the working class and does it retain its revolutionary potential?” It sounds abstract, but it is a deeply political, ideological and strategic question. Either the capitalist ruling class is right, and these changes in the capitalist economy, globalization and technology have further atomized and fragmented the workers — don’t even call them workers; call them associates — until we no longer have the same class interests, or there is something else going on. I smell a rat.

The ideas of the bourgeoisie infect even the labor movement. That is why the labor leaders have such narrow, limited ways. We have to fight bourgeois influence in the movement. We have to let everybody know that the working class is low-wage workers, migrant workers. Why wouldn’t you want the millions of migrant workers to be in the union movement? They are the most militant and the most politically advanced, the strongest sector. We want the migrant workers leading it and the militant youth who have no job and may never have a job. Including the youth who rose up in Ferguson! That is our class.

Our relationship to them is not based on sentiment or altruism. They are our class sisters and brothers, regardless of their circumstances. The homeless, the prisoners, the most downtrodden and oppressed are part of our class.

We have got to get over narrow, stupid, bourgeois ideas, old encrusted ideas that somehow confuse or reverse that truth.

The ruling class celebrated the 25th anniversary of the fall of the Berlin Wall. They see it as the beginning of the period that led to the collapse of the Soviet Union.

But they are not as cocky as 25 years ago, because their world system is in deep crisis. The world capitalist economy is so bad there is going to be something — whether a bank failing somewhere or some other event — that starts it. Whether it is a war — and you see their mission creep to a wider war in the Middle East. Whether it is a struggle with Ukraine and Russia, or whatever is the catalyst for the next catastrophic economic and financial crisis. It is coming.

The collapse of the Soviet Union was the biggest disaster for the working class in history. Our class is still reeling from it. But our conception of world socialist revolution was never exclusively based on the existence of a camp where the working class held power. That is important. The more places the working class holds power, the better. We all agree.

That paradigm is passing. The economic crisis and changes in the capitalist system are making the world smaller – the distance between New York and Berlin, South Africa, Indonesia, Buenos Aires or Iraq is much smaller. The decisive thing for the revolutionary party is to do what is necessary to forge unity between the workers and oppressed. In order to forge that unity the working-class movement has to militantly, aggressively, consciously seek out ways of coming to the aid of the most oppressed. It is the only way, the only path to real global unity of the workers and the oppressed, and it is the path to socialist revolution.