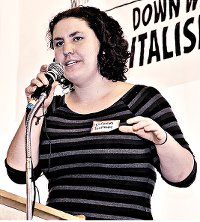 I would like to ask all the FIST members, in fact, all the young people in the hall, to stand — because you are the future of Workers World Party!

This year’s conference comes at a critical juncture.

Many of you who have gathered in this hall have been on the front lines of the protests in solidarity with the heroic Gaza resistance. You have participated in support of the Ferguson rebellion, and many of you have also played critical roles in support of the emerging low-wage workers’ fight for justice.

In fact, we are poised with contingency plans for our conference if the Ferguson grand jury announces its decision this weekend. If that happens, we will be in the streets to demand justice for Mike Brown and an end to police terror.

We also come here today inspired by the resistance of our sisters and brothers and comrades in Mexico who are fighting a life-and-death struggle for their children and their fellow students.

We are inspired by our Cuban comrades, whose doctors and health professionals have traveled to West Africa to fight Ebola and the criminal neglect by the imperialist West.

What is crucial as communists is that all these resistance movements — whether they have been to stop union busting, end racist attacks on oppressed youth or defend the rights of migrant children — are all connected to the fight against capitalism and imperialism.

Capitalism today is at a dead end, and we must become the grave diggers of this decaying system, which puts profits before people and promotes worldwide unemployment, hunger, war and ­oppression.

The upside to all of this is that our class is worldwide, and we have the power to unite globally and defeat capitalism and imperialism. Without our unity, without the power of our entire class fighting together, the very future of the planet is in danger.