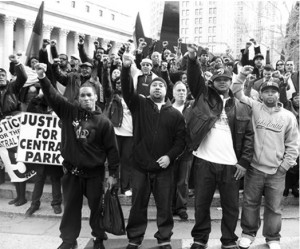 “This is now the icing on the cake,” said Raymond Santana, one of the Central Park Five. “My whole life has been about fighting this case. … Back in 1989, our voices were taken from us and we were silenced, and now, to have it back, to stand up tall and to take what’s rightfully ours, it’s our humanity. … Finally … we can just exhale and we can relax and then enjoy the moment of this victory. … It’s overwhelming. It’s still sometimes unbelievable.” (ny1.com, Sept. 5)

Nearly 12 years after filing their lawsuit against the city of New York and its police department for racially motivated violations of their civil rights, false arrest, malicious prosecution, wrongful conviction and imprisonment, the settlement of the Central Park Five case was approved by Judge Ronald Ellis on Sept. 5 in the amount of $41 million.

The amount represents $1 million for each year that Santana, Kharey Wise, Antron McCray, Kevin Richardson and Yusef Salaam served in prison. They served between 7 and 13 years. Then teens, the five are now men in their 30s and 40s.

In June, Mayor Bill de Blasio officially settled the notorious “Central Park Jogger” case, and the comptroller approved the awarded monies. On Sept. 5, de Blasio stated, “This settlement is an act of justice for those five men that is long overdue. We can finally put this case behind us, and these five men and their families can begin to heal these wounds and move forward.”

The Central Park Five, as they became known, were five innocent Black and Latino youths, ages 14 to 16, who were arrested April 1989 for the rape of a white woman in Central Park. They were convicted and imprisoned the following year. In 2002, they were exonerated when Matias Reyes, who was in prison for a different crime, confessed to the rape and his DNA matched evidence from the victim.

In 2007, Mayor Michael Bloomberg filed a motion to dismiss the five’s lawsuit, which a federal judge denied. However, the settlement agreement included exceptionally strong wording by the city’s Corporation Counsel that the settlement is not to be construed as an admission of any wrongdoing by the police detectives or the district attorney’s prosecutors, past or present. This followed vicious courtroom attacks on the five by city lawyers during the years of litigation.

On Sept. 9, Michael Tarif Warren, a lawyer for the five, stated that “even though the corporation counsel is implying that with investigators and prosecutors such as Elizabeth Lederer and Linda Fairstein, there was no malfeasance, the fact that this $41 million is the highest settlement that the city has ever engaged in for wrongful conviction completely refutes his assertions.” (Amsterdam News, Sept. 11)

Supporters of the five say Lederer and Fairstein conspired with the police to railroad the teens, the two have profited hugely from this case, and they must be held accountable. That has led to calls for an investigation into how the case was handled.

In the article Salaam said, “It is all overwhelming and bitter sweet. … We are all still trying to process what I call a sort of victory. I’m glad the battle is over, but I know the damage done isn’t covered by the amount we were awarded. No amount can replace the loss of freedom, justice and equality. … There was nothing allocated to address the pain and suffering our families went through.”

Salaam added his concern for Black communities, saying that “we are far too often the ones at the end of the stake, roasted over the coals to satisfy the sadistic nature of the sick presence of institutionalized racism.”

What happened to the teens was a legal lynching, leav­ing the five with the indelible scars of being labeled criminals. The damage done is irreparable, and justice so long delayed is equivalent to justice denied, the five say.

The will to win and the tenacity of the men, their families and the community to never give up kept the case alive in people’s minds and hearts during the past 25 years. Even small victories are important.

There’ll be more challenges ahead for the Central Park Five. The struggle continues.