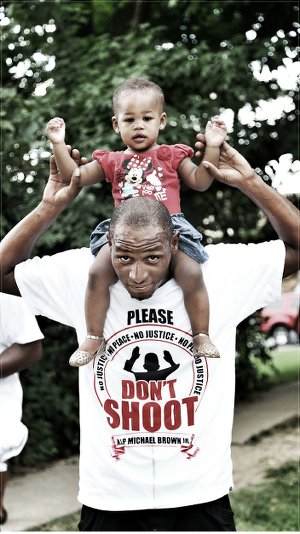 Parent and child at protest in Ferguson, Mo.

The people of Ferguson, Mo., and supporters are still demanding the indictment and arrest of white police officer Darren Wilson for fatally shooting 18-year-old Michael Brown on Aug. 9. They attempted to block traffic on Interstate 70 on Sept. 10.

Large numbers of police were in force to try to prevent the protest from having the desired impact. Despite the heavy law enforcement mobilization and the arrests of 35 protesters, traffic was tied up for hours.

The demonstration illustrated the African-American community’s ongoing discontent in the St. Louis suburb, which in August witnessed the most significant urban rebellion in several years in the United States. When the youth in Ferguson rose up in mass demonstrations, it struck a chord among African Americans and other oppressed communities across the U.S.

On Sept. 10, RT reported on the civil disobedience that day: “The protest started at 3 p.m. Central time, with people gathering at the Hanley Road interchange. Police lined the overpass and stood along the street, then surrounded the demonstrators.”

St. Louis Post-Dispatch photographer David Carson wrote on Twitter during the start of the action: “Police on Hanley seem ready for lots of arrests with a Department of Corrections bus.” Riverfront Times journalist Danny Wicentowski tweeted that a massive reserve force, of more than 20 police cars, was near the staging area.

A Sept. 10 Blaze article reported: “The community appears to be growing impatient as Ferguson officer Darren Wilson waits to find out whether or not he will be indicted by a grand jury in Brown’s death. Some in the community are vowing only a conviction will satisfy protesters.”

The Blaze article quoted St. Louis resident Whitman Harris who told the St. Louis Post-Dispatch: “If (Darren Wilson) doesn’t get a guilty conviction, this whole nation is going to riot.”

The Sept. 9 Ferguson City Council meeting was the first since Brown’s shooting a month earlier. The turnout was so large that it was moved from City Hall to Greater Grace Church to accommodate 600 participants.

Residents expressed outrage over the St. Louis County grand jury’s failure to indict Wilson. Security guards restrained some speakers who were not satisfied with officials’ responses. Mayor James Knowles III stated that the City Council would only listen to comments from the public. People yelled, “Shut it down!” referring to the legislative body.

Several “criminal justice reforms” were read into the record at the meeting, which illustrated the blatant criminalization of the majority African-American community in Ferguson. It was revealed that local authorities had arrested some 12,000 people out of a population of 21,000.

Such a large number of arrests of Ferguson residents sheds light on the state’s efforts to criminalize Brown after his death. Mass demonstrations opposing Brown’s killing and demanding justice were immediately portrayed as unlawful acts, which prompted the militarization of the police and their utilization of high-powered rifles, teargas, pepper spray, bean bags and rubber bullets.

St. Louis Today reported on the Sept. 9 meeting: “The overhaul to the municipal court system includes reducing revenue from fines and reforming procedures. Court fine revenue would have to stay at or below 15 percent of the city’s total revenue and any court revenue over that amount be used for special community projects instead of general revenue uses.”

Hundreds of people went to the Ferguson police clerk’s office during the week after the City Council meeting to test the reforms. Those facing imminent arrest were given 30 days to arrange payments of outstanding fines that could land them in jail.

The Sept. 12 New York Times said those who went to work out payments “looked around skeptically.” It quoted Katrina Clemons, who owed nearly $800 in fines and penalties from a $250 traffic ticket, “I don’t know if they are going to lock me up.”

In 2013, Ferguson issued more than 25,000 arrest warrants, averaging about three per household. The Arch Defenders League, a local nonprofit organization, revealed that about half the courtrooms in Ferguson and surrounding cities often blatantly violate residents’ constitutional guarantees, subjecting them to detention, job losses and evictions.

A Sept. 12 New York Times review noted, “Data from municipal courts across Missouri show that in 2013 … Ferguson had the highest number of warrants issued in the state relative to its size. Arrest warrants are often served by municipal courts when someone fails to appear in court to pay fines for traffic or other violations, like shoplifting, assault or disturbance of peace.”

With such a criminal justice collection and incarceration policy in Ferguson and surrounding cities, the only real solution must go beyond mere reforms. It must guarantee a general amnesty for those facing fines and jail sentences for alleged offenses. Such a gesture by the municipal courts would provide a mechanism for some normalization of relations among the police, the prosecutors and the judicial system — and the people.

This amnesty — and the immediate indictment and arrest of police officer Darren Wilson — would go a long way toward meeting some of the demands put forward by the people of Ferguson. Additional programs aimed at job creation and educational opportunities would help to address the gross economic underdevelopment so prevalent in the region.