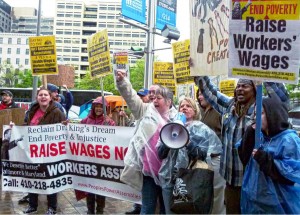 Washington, D.C. –It was rainy, windy and cold, but this didn’t dampen the enthusiasm of dozens of protesters gathered outside the Ronald Reagan Building and International Trade Center in Washington, D.C., on April 29 to tell the National Restaurant Association, “We can’t survive on $7.25!”   A number of passersby, in cars and on foot, gave the protesters a big thumbs up.

The NRA represents all of the million-dollar, fast-food chains, including Wendy’s, McDonald’s, Burger King, Domino’s Pizza, Subway, Dunkin’ Donuts, 7-Eleven, Aramark Corporation, Darden Restaurants and over 100 more.  The average hourly “earnings” of the CEOs of these corporations is $11,700!

The protest took place while the NRA was holding an awards banquet, wining and dining on expensive foods and champagne. Many of the fast-food restaurant owners scurried like rats past protesters to seek protection from the Homeland Security police who were guarding the building.  In effect, the public were footing the security bill.

Some other CEOs taunted demonstrators and openly expressed disdain for the low-wage protesters only to see the demonstration move ever closer to the building’s doors.

Speaking in support of a wage increase for low-wage workers, Larry Holmes with the New York Peoples Power Assembly stated: “If we were giving out awards tonight, it would be for the greediest CEO on the planet.  We represent more than 40 million workers who can’t be here tonight to confront these millionaires and billionaires, but some day they will.

“These privileged elite are used to ordering people around so they may not be aware that their workers are getting organized and will become the tidal wave that drowns them.”

The protest was organized by the Baltimore “We Deserve Better” Workers Assembly to keep up the pressure for an increase in the minimum wage to $15 an hour and to expose the NRA’s anti-minimum wage lobbying operation.  Participants came from as far away as New York and Philadelphia.

BWA organizer Sharon Black told Workers World, “The NRA is meeting in the Ronald Reagan International Convention Center, a federal building, because they’re so hated they felt that their conference needed the extra protection that they’ll get from the government because of the venue.”

Black noted, “The National Restaurant Association’s conference this year is devoted to lobbying and strategizing against any efforts to raise restaurant workers or any other low-paid workers’ wages.”

One day after the protest, a bill to raise the federal minimum wage to $10.10 was defeated in the U.S. Senate despite polls showing 63 percent of people in the U.S. support a minimum wage hike.

Fast-food worker Daniella Longchamp, also an organizer with BWA, described the sub-minimum wages of $3.25 and the sexual harassment she endured at age 16 during her two-year stint at Papa John’s Pizza.  Longchamp directed her remarks at the NRA members rushing into the building: “We are coming back and getting what’s ours.  We are not going to keep making profits for you.”

BWA member Beth Emmerling stated that 60 percent of fast-food workers and two-thirds of tipped workers are women, half of whom are single mothers. “Children are being hurt because the CEO of Taco Bell, who makes $22 million a year, doesn’t want to pay a living wage to his workers.”

Other speakers included Super Shuttle worker/organizer Tony Yovo with UFCW Local 1994, fired from his job for union organizing; Bill Preston, president of AFGE Local 17; laid-off worker Brandon Wallace and homeless activist Lee Patterson, both from Baltimore; and retired Philadelphia postal worker Joe Piette, who noted that the bosses try to pit low-wage workers against unionized workers. “Anyone who is in a union today needs to get involved in supporting the low-wage worker movement to keep all wages from being driven down.” Occupy DC members came out in support.

Caleb Maupin with Fight Imperialism, Stand Together (FIST) described the capitalist system’s transition to a state of permanent low wages with millions of underemployed and unemployed youth.  “They build prisons, close schools and put cops in schools.  They are intent on breaking low-wage workers down to replace them with the next batch of workers vying for part-time, minimum wage jobs. They put cops on every corner to beat youth down.

“They tell us to hate Russia, hate China, hate Iran, but I hate the bosses in this building. The capitalist system is based on making profits for a few wealthy individuals. The way out is for a peoples’ movement that fights against police brutality and against wars abroad.  It’s the same fight as the struggle for union wages, the fight against the 1 percent. It’s time for working people to seize control.  We built this world and we should own it.”