An emergency protest was held April 29 in front of the Staples Center in Los Angeles against the racist comments made by Los Angeles Clippers owner Donald Sterling.

TMZ.com exposed these audiotaped comments that were released on April 27 on which Sterling was heard telling V. Stiviano that Black people were not welcome at Clippers basketball games.  Sterling was particularly outraged at an Instagram photo taken by the former girlfriend with African-American Hall of Fame superstar Earvin “Magic” Johnson.

A firestorm of condemnation over the comments came immediately from the National Basketball Association Players Association, basketball fans, sports critics and anti-racist people in general.  Hours before the April 29 protest took place, NBA Commissioner Adam Silver held a press conference to announce the NBA’s decision on Sterling: a lifetime ban from Clippers’ games, team practices and operations and a $2.5 million fine, the maximum amount under the NBA bylaws. Silver also called for the sale of the Clippers team, which will take a three-fourths vote from the rest of the NBA owners. 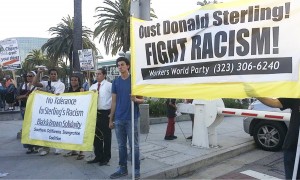 Sterling has a long, sordid history of blatant racist and sexist behavior. Silver’s decisions were impacted by the fact that corporate sponsors were suspending their ties with the Clippers and that other teams threatened to boycott the playoffs if strong action wasn’t taken by the NBA against Sterling.

Despite the NBA press conference announcement, dozens of people still came out in protest against Sterling and received a positive response from fans attending the Clippers versus Golden State Warriors game in round one of the NBA playoffs. The rally was called by the National Action Network; the Compton chapter of the NAACP; SCLC and other community groups.