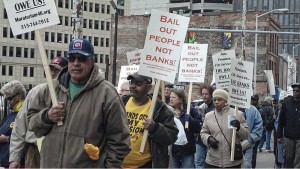 April 26 — The attack on retired city of Detroit workers’ pensions intensifies. Ever since the filing for bankruptcy by Detroit’s emergency manager last summer, it has been clear that the real plan was to use the large pension funds to pay off the banks that hold the largest part of the city debt.

Last November, representatives of the emergency manager testified that they wanted to slash pensions by 84 percent. A “Plan of Adjustment” filed with the court in March detailed cuts to pensions of 34 percent across the board for nonuniformed retirees and 14 percent for police and firefighter pensioners. Cuts had already been made to all medical coverage for those not receiving Medicare; dental and vision protection plans were ended. Cost of living increases to pensions were stopped. These had added 2.25 percent per year.

Outside the federal courthouse, retirees and their supporters have marched and rallied month after month. In one of the biggest actions, hundreds blocked the street on April 1, marching and blasting speeches over loudspeakers for several hours, demanding “Hands off our pensions!” and “Make the banks pay!”

A brief glimmer of hope for retirees appeared as the media spread a new proposal to limit cuts to only 4.5 percent. But retirees soon learned that the city intends to go after $239 million of their nest eggs through additional reductions taken from thousands of retirees who put money each week into an annuity fund run by the pension boards.

The media, continuing to serve the interests of the Wall Street bankers, have tried to make it seem that something shady or illegal had been done — claiming that “excess interest” was paid to those investing into the annuity fund. The fund was considered generous, paying a minimum of 7.9 percent interest per year — and more if the pension fund did well during boom years — but it operated openly and along well-established accounting principles. Not being a profit-making enterprise, the pension boards paid out extra funds when they could, in good years. Yet the pension funds remained some of the best run and well funded in the U.S.

If workers had not invested in the city-run annuity program, it is likely that they would have chosen some other annuity plan among the many that cater to workers. Now, the emergency manager wants to take back hundreds of millions of dollars paid out to workers from 2003 to 2013.

In a serious setback, the pension boards and the official Committee of Retirees (nine members appointed by the bankruptcy court) have apparently agreed to this new plan. First reports were that some retirees would lose their entire pensions in this “claw back.” Later reports state that the maximum cut will be capped at 20 percent (4.5 percent across the board and 15.5 percent maximum annuity recovery). It is hard to believe that officials sworn to protect pensioners, many of them seasoned unionists, would announce an agreement without having every “i” dotted and “t” crossed, as in any contract negotiation. Retirees currently have no idea how much this will cost them.

Anger is great among activist retirees who have been protesting these past months. Some have gathered funds and are airing “Vote No!” radio ads prior to the distribution of ballots to all retirees and survivors of retirees. Many are especially upset over the requirement in the agreement that all appeals on the constitutional issues be dropped.

Organizing by the “Stop Theft of Our Pensions Committee,” a rank-and-file group, along with other organizations, is in high gear for a series of May 1 rallies and marches to denounce the cuts and other attacks on the working class of ­Detroit.

Crisis manufactured to go after pensions

While the emergency manager is eager to go after annuity funds that he has labelled excessive, he refuses to consider going after $300 million paid out to Bank of America and the United Bank of Switzerland. These bankers were responsible for illegal “bond swap” practices that contributed to the financial crisis in Detroit. Instead, with Judge Rhodes’ approval, Detroiters will now pay an additional $85 million to these two criminal banks.

Another $500 million was paid out by the Detroit Water and Sewerage Department two years ago to settle another crooked bond swap deal, yet no officials even mention making an attempt to recover those funds. Nor is there any discussion in the court of going after hundreds of millions of dollars owed by the state of Michigan to Detroit in revenue-sharing funds never paid to the city. Tens of millions owed by banks on foreclosed properties have also never been pursued.

Many retirees have asked how it was possible to go from threatening to take 84 percent, to 34 percent, and now 4.5 percent. If that is the case, then perhaps they don’t need to take any money from retirees at all!

Part of the reduction is reported to have come from a “recalculation” of the expected return from pension fund investments over the next decades. While no one can accurately predict that figure, the emergency manager based his initial calculations on a figure of 6.25 percent. Now he is using a figure of 6.75 percent. This small change wipes out much of the deficit. But the same firm that advised Detroit’s emergency manager also estimated that Florida’s state pension fund could safely assume an 8 percent rate of return. The conclusion is inescapable that the entire Detroit bankruptcy was manufactured, probably for the goal of looting the pension funds.

By getting the retiree associations to drop their lawsuits, the Wall Street sharks hope to set a precedent for the whole country that pension funds are up for grabs.

Detroit workers continue to fight under the slogan “Hands off my pension,” demanding that it should be the banks that pay for their own crisis. Plans have been announced for a July 24 national demonstration in Detroit at the start of the final trial on the bankruptcy.

Sole is a retired city of Detroit employee and past president of ­SCATA-United Auto Workers Local 2334 at the Detroit Water and Sewerage Department. He is a founder of the “Stop Theft of Our Pensions Committee” and a legal party of interest in the Detroit municipal bankruptcy.