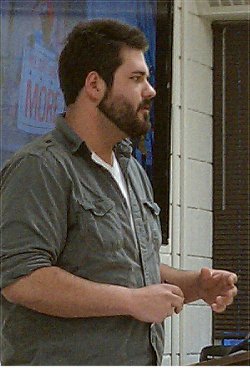 Huntington, W.Va. — A coalition of activists from Fight Imperialism, Stand Together (FIST), Workers World Party, Students for Appalachian Socialism, the Jewel City Solidarity Network and Service Employees union Local 32BJ held a public meeting on March 25 to kick off a “Fight for 15 at Marshall University!” campaign. The meeting was attended by campus workers, faculty, students and community supporters, who received the coalition’s message with enthusiasm and support. Attendees signed petitions that will be hand-delivered to the university administration. The goal of the meeting was to begin to build a mass movement to force the university to accept the coalition’s list of demands.

The coalition’s demands include:

The coalition informed the attendees that university President Dr. Stephen Kopp was given a $155,000 raise in the past two years, taking his salary to $390,000 a year, a 56 percent increase.  Other administrators took raises of 21 percent to 42 percent. This all happened amid skyrocketing costs for tuition, fees and textbooks as well as the ongoing slashing of the university budget.

This reporter, representing WWP, FIST and SAS, talked about the high salaries of top university employees and officials.  “Approximately 168 workers enjoy wages in excess of $100,000 a year and have enjoyed wage increases of over $1 million combined. Imagine what changes could be made in the lives of minimum wage workers, many of whom are single parents and people of color, if they were to receive $1 million of wage increases!”

Many of the minimum wage workers at Marshall University work in privatized sectors such as cleaning, food service and the bookstore.  It was revealed that MU received commission checks from Sodexo for over $1 million as part of a third-party agreement on profits made from food services.  Marshall also received commission checks of over $1.5 million from Follett Higher Education group, which runs the bookstore, which sells “required textbooks” for hundreds of dollars each. With all these profits being made, it is obscene for these companies to be paying their workers such low wages.

In this era of dead-end capitalism, workers are continually being displaced by technology and machinery and forced into low-wage and part-time positions.  The capitalists that own the banks and the means of production are making record profits while a record number of the working class slides deeper into poverty. For this reason it is imperative to organize low-wage workers to combat this trend.