Just a month after a U.S.-backed coup d’état in Ukraine brought to power a regime dominated by neo-Nazis and pro-Western capitalist politicians, the ruling junta finds itself in deep crisis. 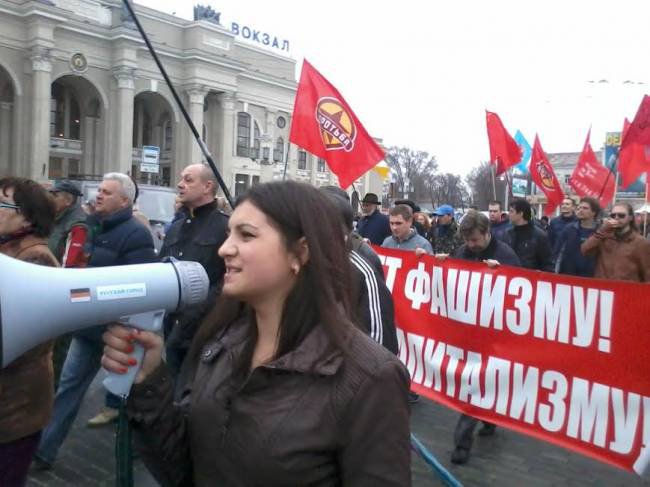 Marchers in Odessa defy threats, demand a referendum on autonomy and an end to political repression, March 23. (Photo: Borotba)

Threats from the government in Kiev and its U.S. and Western European patrons were unable to intimidate the people of the Crimean autonomous region, who voted overwhelmingly to break away from Ukraine and affiliate with Russia on March 16. Russian President Vladimir Putin and local leaders made it official on March 18.

Now infighting has exploded among the fascist factions in the ruling coalition in Kiev.

The International Monetary Fund, meanwhile, has agreed to give the coup-makers an $18 billion loan — but only if they accept painful austerity measures. These are almost certain to throw Ukraine deeper into chaos.

Further, Kiev has been unable to subdue the rebellious eastern and southern regions of Ukraine, where anti-fascists are digging in to organize grassroots resistance.

People in these major working-class industrial and mining areas are rising to oppose the junta and demand political and economic autonomy. They reject the rule of the billionaire oligarchs appointed as new regional governors by Kiev. Some are even calling for re-nationalization of privatized industries.

At this time, most are not calling for separation from Ukraine. 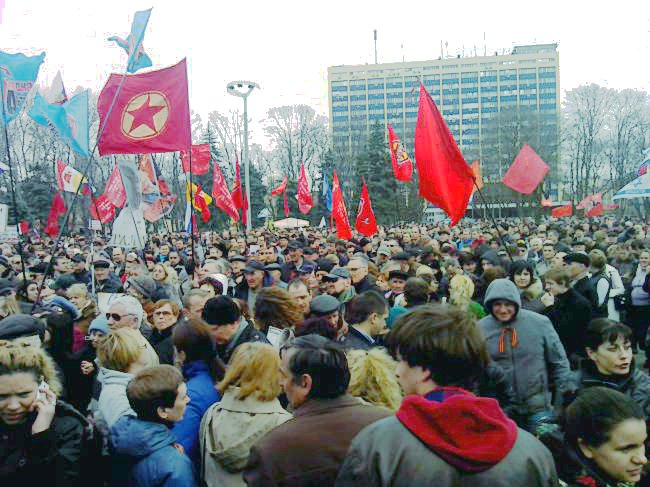 Overnight on March 27-28, members of the neo-Nazi Right Sector gang surrounded the Ukrainian Rada [parliament] and threatened to storm it — much as they had done a month earlier, when the elected government of President Viktor Yanukovych was toppled.

But this time, the Right Sector was protesting its own erstwhile partners, some of whom were barricaded inside, including members of the far-right Fatherhood party and neo-Nazi Svoboda party.

European television broadcast images of Svoboda politicians hanging out of windows shouting epithets while Right Sector goons hurled rocks at them from the street.

On March 24, Right Sector leader Aleksandr Muzychko was shot dead during a police raid in the western city of Rovno. Muzychko had a long history of fascist terrorism and was on several international “most wanted” lists — a Ukrainian version of the anti-Cuba terrorist Luis Posada Carriles.

The assassination of Muzychko was followed by raids on Right Sector hideouts and seizures of weapons.

Avakov has established a “National Guard” under his command to deputize the fascist gangs and bring them all under the junta’s control. He also masterminded the joint neo-Nazi/police patrols that have suppressed any resistance in the western cities.

Avakov represents the coalition of far-right forces that control the commanding heights of police, military and prosecutorial powers of the new regime.

Some forces in the Right Sector, like Muzychko, didn’t want to follow orders. Avakov and his colleagues decided that those who wouldn’t play ball must be eliminated.

The fascist street gangs served their purpose as the violent fists of the Euromaidan protests that ousted Yanukovych. But when it comes to investments and military strategy, Washington, Bonn and the IMF prefer to work with well-groomed, business-suited fascists like Avakov and Svoboda leader Oleh Tyanhybok.

On March 16, the New York Daily News reported that 1.4 million people in New York City — about 1 in 5 — now rely on charities, food pantries and soup kitchens to eat. That’s an increase of 200,000 over the last five years. It’s a crisis echoed in cities, towns and rural areas across the U.S.

Yet what is the top priority of political leaders in Washington? According to a headline in the March 25 New York Times, “Ukraine Aid Leads Agenda as Congress Returns.”

U.S. imperialism has big plans for Ukraine. First, it contain pipelines that control much of the flow of oil and gas between Russia and Western Europe. In addition, stationing NATO troops and weaponry there is also key to U.S. plans to isolate and dismember Russia.

Even after promising the Kiev junta $10 billion in loans, Washington is worried about the stability of the coup. Means have to be found to stabilize the country — that is, make it profitable for the Western imperialists. That means not only controlling the far-right factions in the western part, but quelling the anti-fascist resistance in the south and east.

While the inter-regime crisis was unfolding in Kiev, a leaked phone call posted online revealed more about the fires of war that the Obama administration and congressional leaders are furiously stoking.

The call was from former Prime Minister Yulia Tymoshenko, considered a leading candidate in the presidential elections planned for May 25. Tymoshenko, a leader of the so-called Orange Revolution of 2004, was imprisoned for corruption before the coup.

Speaking with a former military official after the Crimea referendum, Tymoshenko urged her supporters to “take up arms and kill the fucking Russians along with their leader.”

Tymoshenko also said she was ready to “grab a machine gun and shoot [Putin] in the head.”

The recording ends with Tymoshenko threatening to use nuclear weapons against the 8 million Russian-speakers living in Ukraine.

After the call went public, Tymoshenko claimed the part about using nukes was manipulated. The rest, she confirmed, was accurate.

In the cities of southern and eastern Ukraine, the leftist Union Borotba (Struggle) is one of the groups organizing anti-fascist resistance.

Borotba’s central office in Kiev was ransacked after the coup and its activists forced underground. Outside Kiev, Borotba and other anti-fascists work in a hazy state of semi-legality, operating more or less openly depending on the level of organized resistance in each city.

This creates special challenges for organizers. For example, print shop owners refuse to print flyers or newspapers due to threats from the fascists. However, Borotba has managed to get help from sympathetic workers to publish its materials.

A 10,000-copy run of “Front,” the first issue of a newspaper published by Borotba and the Antifascist Resistance Center, sold out in just three days.

In Kharkov, where the Right Sector murdered two anti-fascists on March 14, Borotba plays a leading role in organizing mass resistance.

On March 22, some 2,000 people defied a ban and rallied at Freedom Square for a people’s speakout initiated by Borotba. A major goal of the event was to recruit supporters for the local defense organization, People’s Unity.

Police then charged Borotba leader Denis Levin, a convener of the rally, with violating the ban and ordered him to appear in court on March 26. After a crowd of supporters picketed the court during his hearing, the judge dismissed the charge as “baseless.”

In Odessa, Borotba activists took up the case of Anton Davidchenko, a local resistance leader who was seized by the “Alpha” special police unit on March 17 and kidnapped to Kiev, where he is being held incommunicado.

Some 1,000 people defied fascist threats and rallied at Odessa’s Kulikovo Field on March 23 to demand a referendum on autonomy. Led by Regional Council Deputy and Borotba activist Alex Albu, they marched to the prosecutor’s office to demand Davidchenko’s release and an end to the regime’s political repression.

The Communist Party of Ukraine (KPU) has also been targeted by the junta.

On its first day, the new regime threatened an outright ban of the KPU. The party’s headquarters in Kiev was trashed and is still occupied by the Right Sector. Party members have been attacked and beaten.

KPU leaders have continued to assert their membership in the parliament although they have been effectively banned from Kiev since the coup.

On March 26, the KPU held its 47th Extraordinary Congress in the eastern industrial city of Donetsk. The party nominated its general secretary, Peter Simonenko, to run for president in the May elections.

It is unclear whether the KPU will be allowed on the ballot, or what dangers party candidates might face.

Emphasizing the need of the party to preserve its cadres and organization, Simonenko said: “We have grounds for optimism. In a short time, the new regime showed its anti-people nature and incompetence, its inability to govern. The inevitable deterioration of the situation of workers as a result of the requirements of the IMF will inevitably create the basis for a new protest movement.”

Workers, youths and retirees alike are determined to defeat the far-right gangs and push back Western imperialism. They remember their history as part of the Soviet Ukraine, which defeated the fascist occupation during World War II, with support from the Red Army.