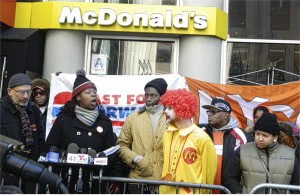 New York — A large group of fast-food workers and their supporters held a flash protest on March 18 in a midtown Manhattan McDonald’s and shut it down. Workers joined members of the community and immigrant rights activists to fight for a $15-per-hour minimum wage and union rights for fast-food workers.

As they went in, the protesters shouted: “We came, we saw! What you did is against the law!” — referring to McDonald’s withholding overtime pay. It soon was impossible to sit down or order anything. The bosses quickly panicked and began shutting down the lines to the counters, and then demanded that everyone leave — saying that McDonald’s was closed.

“Ronald McDonald” — it looked like him — appeared. As the protesters were being kicked out of the store, they handcuffed and “arrested” him. The number of media reporters and police quickly grew. The group’s chants against the bosses grew louder: “Every nickel, every dime! We deserve that overtime!”

A handcuffed Ronald McDonald looked down at his shoes in front of the store as media representatives covered the damning testimony being given by the mostly Black and Latino/a fast-food workers. The workers exposed the company’s wage theft — extra exploitation stemming from no overtime pay, altered pay records, and denial of meal and rest breaks.

The workers are also fighting to be reimbursed for the cost of cleaning their uniforms — which is the bosses’ responsibility, according to both state and federal law in New York.

Public Advocate Letitia James came to witness the sidewalk hearing for Ronald McDonald and to speak of her plan to push the city government to create an anonymous wage-theft hotline. Her action came a day after state Attorney General Eric Schneiderman said that the owner of seven Manhattan McDonald’s will have to pay 1,600 cheated workers nearly $500,000.