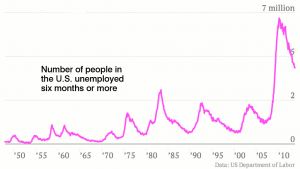 Five years into the capitalist recovery, the crisis of mass, long-term unemployment will not go away.

“To grasp what that means for the health and future growth of the economy,” wrote the Christian Science Monitor on Feb. 15, “consider this: The ‘long-term unemployed’ alone account for 2.3 percent of the nation’s workforce — a share that’s almost as high as it’s ever been during the depths of any prior recession since Labor Department tallies began in 1948. That’s the case even though this is not a recession but roughly Year 5 of a recovery that began officially in June 2009.”

Millions of unemployed not accounted for

However, the figure of 3.8 million long-term unemployed is enormously understated. It is based on the official definition of unemployment, according to the Bureau of Labor Statistics, which defines an unemployed worker as someone who has been looking for a job. That is determined only by a BLS survey.

But a record 91 million people were not in the labor force in the five months from October 2013 through February 2014. Comparable numbers apply to the entire past year. The BLS does not provide figures on how many millions of these people are considered to have dropped out of the work force long ago because they were long-term, unemployed workers who gave up trying to find jobs.

The ruling class is worried about this trend. Many articles have appeared in the big business press about it. And research has been done on the subject. Some studies claim that the problem is that workers don’t have the needed skills. Others say that the bosses discriminate and won’t hire anyone who has been out of a job for six months or longer. Others say that discouragement over long-term unemployment saps the morale of workers and they give up.

Of course there is discrimination by the bosses. For example, Black workers are 22 percent of the long-term unemployed but 13 percent of the population. Of course some workers don’t have the skills that may be needed. And it does not take rocket science to know that going without a job for months and years is totally demoralizing.

But Karl Marx laid out a much more fundamental explanation for the persistence of long-term unemployment — which applies to the present stage of capitalism. He explained it in Volume 1 of his monumental work, “Capital.”

In that work Marx developed the Law of Capitalist Accumulation. In summary, the law states that as capitalism develops generation after generation, the capitalists compete with each other for market share by steadily trying to make their production more efficient, so they can have a cost advantage over their competitors, get more profits and destroy or swallow up their competition.

This cost advantage comes by putting in more and more technology so that fewer and fewer workers turn out more and more goods and services (commodities) in shorter and shorter time for lower and lower wages.

The effect of this process is to get rid of more and more workers by replacing them with machines. In the high-tech era in which we now live, workers are being replaced by robots, software, computers, sensors and all manner of other technological means. Workers’ skills are being simplified, many skills are no longer needed, and fewer jobs exist all around.

Growth of ‘reserve army of unemployed’

This leads to what Marx said would be the growth of a “reserve army of unemployed.” He predicted that the relative need of the bosses for labor would be reduced as capitalists and bankers invested more and more in technology. A surplus population of workers would grow. That is precisely what underlies the intractable problem of long-term unemployment that is plaguing the working class at this new stage of capitalism at a dead end.

A glance at the U.S. capitalist economy since the crisis began in 2007 confirms Marx’s analysis. It reveals that the Law of Capitalist Accumulation has brought devastation to the masses.

When the crisis first broke out, the GDP plunged. Since then, it has not only reached the 2007 peak, but the value of goods and services produced has increased by $2.3 trillion in constant dollars.

Now look at the labor force. According to BJS statistics, in December 2007, 146.2 million workers were employed, which is consistent with the average number employed during that whole year. This is how many workers produced the $14.5 trillion in goods and services.

Last December, 144.6 million workers were employed, which is slightly above the monthly range for the year. This means that in 2013 at least 1.6 million fewer workers produced $2.3 trillion more goods and services than had been produced in 2007.

Thus, as the bosses employed more and more technology during the crisis and the so-called “recovery,” they reduced their need for labor by millions of people. No matter what skills workers have or do not have; no matter whether the bosses discriminate against them or not; and even if they never get demoralized and keep looking for jobs, workers cannot find employment.

Workers cannot work if the bosses don’t need to exploit them in order to make profits. If the bosses are making their profits with fewer and fewer workers, then there is permanent growth in the “reserve army of unemployed,” as Marx put it.

Capitalist economists will never be able to see this because they are wedded to capitalist exploitation. But workers, with the aid of Marxism, can see the problem clearly. This is a necessary condition to getting rid of the problem — which is capitalism itself.

Fred Goldstein is the author of “Low-Wage Capitalism” and “Capitalism at a Dead End,” which has been translated into Spanish as “El capitalismo en un callejón sin salida.” Both books are available from online booksellers.