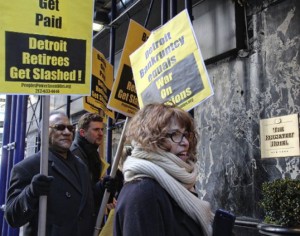 New Yorkers with the People’s Power Assembly Movement welcomed them only as they should be — with a “Detroit is NOT for sale” emergency demonstration denouncing their pro-1% theft, which the MPI celebrated in the name of “the next opportunity.”

The MPI has also hosted the disgraced and discredited union-busting, anti-public-sector-workers governor of Wisconsin, Scott Walker. Now it is accomplices with the United Bank of Switzerland, Bank of America and Wall Street firms that marketed subprime loans to Detroit homeowners.

These banks owe Detroit, a majority African-American city, reparations and then some. They are responsible for the subprime housing crisis which has destroyed so many of Detroit’s neighborhoods.

The banks are also responsible for draining hundreds of millions of dollars from New York City’s treasury — in the form of similar loans, debt-service payments, tax breaks and bailouts. Meanwhile, schools are closing, hospitals are being shut down and essential services are cut, very similar to what has happened in Detroit.