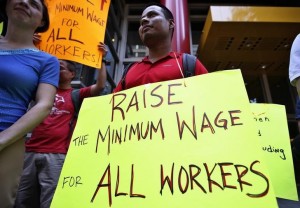 Low-wage workers are carrying out a determined and heroic struggle to force giant corporations like McDonalds, Starbucks, Walmart and others to increase their pay beyond the current starvation wages. Many workers have been penalized. Some have been fired.

But they have also won important victories. For example, on Feb. 19, Gap Inc. announced that they will increase the starting pay for their workers to $10 an hour.

And these struggles have won broad public backing, with the vast majority favoring an increase in the federal minimum wage. According to two recent polls — CBS News and Pew Research — 72 percent and 73 percent respectively of those asked, support raising the minimum wage to at least $10.10 an hour from the current $7.25 an hour, which is the Democratic Party proposal before Congress. Even half the Republicans polled support this hike. (CNN.com)

The law would also raise the base wage for tipped workers from the current $2.13 an hour (frozen for two decades), to $4.90 an hour in a three-step increase. Then, it would remain at 70 percent of the new minimum wage. The current ratio is 29 percent.

Of course, a raise to $15 an hour is needed to help lift these workers, mostly women, many Latino/a and African American, out of poverty. Many low-wage and pro-worker groups, including Workers World Party, are demanding this. The $10.10 proposal would still leave more than 9 million workers, more than 40 million people when their families are taken into account, below the poverty line.

But giant corporations have called on their political servants in Washington to block any raise in the minimum wage. For decades, they have used their vast technological resources and armies of low-paid workers in Asia, Eastern Europe and elsewhere to amass huge fortunes while they close down operations in the U.S. This has forced many workers to slave away for a meager pittance at fast-food restaurants, department stores and other low-wage shops. This has been a gold mine for these giant companies.

Republican congresspersons like John Boehner adamantly oppose any increase in the minimum wage. They are using the same false argument now as they did in 1938 when the first minimum wage law was passed: “When you raise the cost of something you get less of it,” he said, then adding, “The very people the President purports to help are the ones who are going to be hurt by this.” (Washington Post, Jan. 28).

According to this logic, raising the minimum wage would “force” these corporate giants to fire thousands of workers.

Of course their political ancestors mouthed the same kind of nonsense to try to foster child labor and to oppose the eight-hour day.

The right wing cited a Feb. 18 Congressional Budget Office study, which estimates that 500,000 low-wage workers may lose their jobs if the minimum wage is increased to $10.10 an hour. At the same time, the CBO study estimates that some 900,000 workers would be lifted over the official poverty level. For 16.5 million workers, higher earnings would occur during an average week in the second half of 2016 if the $10.10 option was implemented. (cbo.gov).

The CBO study admits tremendous uncertainty about its unemployment projection for this law, and much well-respected research has been presented to show that the effect of raising the minimum wage for workers would cause little or no job loss.

It is clear that far more people would be helped than hurt by even this most modest increase.

The right wing also often asserts that it is teenagers who mostly are subject to the minimum wage law. But another CBO study revealed that, from 1979 to 2011, the share of workers earning less than $10 per hour aged 25 to 64 grew from 48 to 60 percent, while the share of those with at least some college education grew from 25 to 43 percent. (Jan. 7)

Many union leaders have voiced strong support for an increase in the minimum wage. Some trade unionists and community groups have backed the low-wage workers where it counts — at demonstrations and on the picket lines.

Some unions actually have contracts that peg members’ pay to an index based on the minimum wage. When the minimum wage goes up, so do the wages of these union workers. This kind of solidarity infuriates big business and their Wall Street Journal mouthpiece. When explaining why unions support a hike in minimum wage, the WSJ states scornfully: “The real reason is that some unions and their members directly benefit from minimum wage increases — even when nary a union member actually makes the minimum wage.” (online.wsj.com, Feb. 25).

But it is precisely this solidarity among all workers to support the struggle by low-wage workers that is so needed right now. Big business will do everything in their power to squeeze every penny out of these workers and drive them more and more into poverty. The only thing that can and will stop them is a united working class supporting those who are so righteously demanding and deserving a living wage.