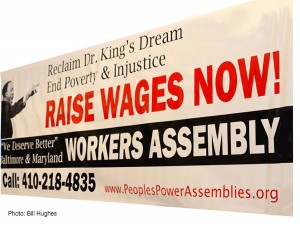 Baltimore — The “We Deserve Better” Workers’ Assembly convened a very dynamic and enthusiastic regional workers speak-out on Feb. 22 in Baltimore to commemorate the third anniversary of the Wisconsin Capitol occupation and to set plans for actions in the spring.

The participants consented on a number of key actions for this spring, including a “May 1st Rise Up Baltimore” protest and strike against low wages; an April 29th call for regional and national protests at the National Restaurant Association Convention in Washington, D.C., which will bring together bosses who have been some of the most vocal in opposing raising the minimum wage; a week of protests from March 7 to March 15 called “March for $15,” referring to the demand for a $15 minimum hourly wage; and support for a local March 13th march for UNITE HERE Baltimore/Washington International Airport food service workers.

The assembly also took up a special statement and call for solidarity with low-wage workers and voted to make organizing to support SuperShuttle workers at BWIA a priority this spring. This includes holding a major Baltimore rally and fundraising dinner and supporting a bill in Annapolis, Md., which requires that contract workers be declared workers, allowing them to organize a union.

The overwhelming theme of the assembly was support and solidarity with the new and dynamic low-wage workers’ struggle. Many of these workers participated in the assembly, including the co-chairing of the two sessions. Participants concluded that the fight for jobs and justice, and against austerity and attacks on the union movement, and the struggle against racism and for immigrant rights are very much connected to this fight.

The assembly also voted to support the homeless; to take up the fight to defend the rights of jobless workers and the community in general, which is fighting to strike down employment and housing applications that use people’s conviction records to deny employment, and to oppose the Trans Pacific Partnership.

Among the major highlights of the day were the testimonies of SuperShuttle drivers and representatives of United Food and Commercial Workers Local 1994.

Postal workers showed two special videos highlighting their fight for justice. There was loud applause when two younger activists spoke on the need to support immigrant rights and oppose racism and racist violence.