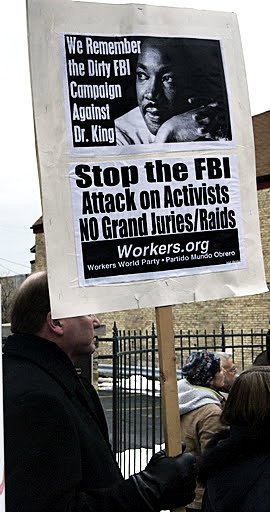 The following is a statement issued by The Committee to Stop FBI Repression on the release of FBI documents which reveal a McCarthyite-like attack on free speech and the right to organize. The committee has been defending movement activists targeted by FBI raids starting in September 2010, and also defending other political prisoners. For more information, go to stopfbi.net.

On Feb. 26, the application and affidavit used to obtain the search warrants for the 2010 raids on homes and offices of anti-war and international solidarity activists were unsealed, revealing lies and attacks on the constitutionally protected rights to speak out and organize. The unsealing of these documents came as a result of legal action taken by the anti-war activists.

The timeline in the documents shows what we have always stated. Shortly before the huge protest at the Republican National Convention, an undercover police agent and professional liar, going by the name of Karen Sullivan (identified in the affidavit as UC1), joined the Anti-War Committee and became active in the efforts to build the demonstration. She later joined Freedom Road Socialist Organization.

The documents demonstrate a callous disregard for free speech and the right to associate. They in effect criminalize those of us who oppose U.S. wars and stand in solidarity with the oppressed. From Palestine to Colombia, people want to be free from the domination of Washington, D.C. We have said this publicly on thousands of occasions and will continue to do so.

Not unlike countless “anti-terrorism” cases against Arabs and Muslims, the affidavit contains a collection of lies and out-of-context statements to try to isolate people from their communities and movements. In a McCarthyite return to the 1950s, the affidavit shows an obsession with Freedom Road Socialist Organization. After decades working in the anti-war movement, anyone who has worked with us knows we are proud to be fighters in the struggles against war, and for justice and economic equality. The documents imply that is something sinister, when really, it is commendable.

Having just received these documents, we are in the process of consulting with attorneys and we will have more to say in coming days.

We are glad we forced the government to unseal these documents and we demand that the U.S. Attorney make a public statement that the investigation is closed and that there will be no indictments of anti-war and international solidarity activists. Moreover, we demand an end to repression and spying against the people’s movements.