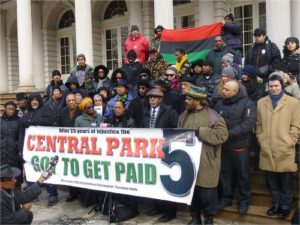 New York – Supporters packed the steps of City Hall on Feb. 4 to demand that New York City Mayor Bill de Blasio make good on his promise to finally settle the case of the Central Park 5 and bring an end to the 25-year ordeal of these men and their families.

The Central Park 5 youths – four African Americans and one Latino, all under age 18 – were framed by the New York Police Department and District Attorney Robert Morgenthau for the rape and brutalization of a white woman during the infamous Central Park Jogger case in 1989.

The NYPD forced confessions from the youths amidst a racist campaign egged on by then Mayor Ed Koch, Gov. Mario Cuomo, real estate developer Donald Trump and the corporate media.

The men were finally exonerated in 2002, when a convicted rapist confessed to the Central Park attack. However, billionaire Mayor Mike Bloomberg never made a serious effort to settle the lawsuit brought by the five men for civil damages.

Three of the five — Yusef Salaam, Kevin Richardson and Raymond Santana -– spoke at the news conference. They talked about the longtime abuse and suffering faced by their families.

“We continue to stand up,” said Santana, “because we know there are Central Park 6s, 7s, and 8s happening every day. Young people need to know what happened.”

“We were not supposed to survive,” stated Richardson. “We were supposed to die or rot in prison forever. But we are here, and we are still standing.”

‘City must do the right thing’

The news conference also heard from Salaam’s mother, who is fighting late-stage cancer and said she was holding on to see the case finally resolved.

Attorney Michael Tarif Warren explained that while no monetary settlement could ever compensate for the loss of the men’s youth, “the city must make a substantial showing. The city must do the right thing.”

The news conference was organized by the December 12th Movement, a revolutionary Black organization that has championed the cause of the Central Park 5 for the last quarter century. D12 leader Amadi Ajamu, who chaired the event, singled out the late activist Elombe Brath for his untiring dedication to their case.