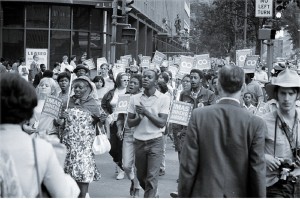 Some five decades after President Lyndon B. Johnson declared a “War on Poverty,” class divisions inside the U.S. are widening. Today, the conditions of poor and working people are rarely addressed in Congress, the White House or the boardrooms of the transnational corporations and financial institutions.

President Barack Obama touched on this issue during his State of the Union speech on Jan. 28, raising the issue of class polarization within a framework that bemoaned the structural barriers to people born and living in poverty. What was not said is that these growing disparities are an outcome of the capitalist restructuring that has been well underway for the last four decades.

How can poor and working people increase their incomes and improve their standard of living when millions of jobs have been eliminated from the U.S. and real wages for existing employment have precipitously declined over the years? There are no meaningful governmental or corporate programs that provide the type of assistance that working people need to survive, let alone ensure their stability and safety.

Movement based on class politics needed

During the period of the War on Poverty from 1964 to 1968, the political atmosphere was marked by mass protests, rising political consciousness, urban rebellions and the founding of radical organizations in this country that were coupled with and influenced by socialist and national liberation revolutions in Africa, the Middle East, Asia and Latin America. Johnson was faced in 1964 with the necessity of passing federal Civil Rights legislation and attempting to stave off protracted international revolutionary struggles, with Vietnam the most pressing.

The existence of the Soviet Union, the People’s Republic of China, North Vietnam, revolutionary Cuba, the Democratic People’s Republic of Korea and other progressive states provided a counterweight to U.S. imperialism and its allies. With mass pressure from African Americans and their allies, Washington and Wall Street realized that they had to eliminate obvious forms of racial discrimination and national oppression.

Nonetheless, the fundamental structures of capitalist relations of production remained intact. In order to protect its interests, the imperialists embarked upon measures that further globalized the capitalist system of production while disempowering the working class and oppressed both in the U.S. and around the globe.

Auto factories, steel mills, light industrial production and their subsidiary facilities were shut down and moved across the country or outside the U.S.  to increase profitability. Union membership declined, and the federal government passed legislation that fostered this wholesale attack on the working class.

Many of the gains made during the Civil Rights Movement era of the 1950s and 1960s have been eroded by outlawing affirmative action in key states, the Supreme Court striking down enforcement provisions of the 1965 Voting Rights Act, and passage of “right-to-work” (for less) laws in several northern and midwestern states, along with an ideological offensive against entitlement programs, municipal unions and public education.

These developments constitute an intensifying class war waged by the capitalists against the workers and the poor. The question of resolving the problem of income inequality must be viewed within this context.

Until a movement comprised of class-conscious organizations takes control of political direction in the U.S., the conditions of the majority of the people will continue to worsen. The Democratic and Republican parties both represent the interests of the bankers and the corporate bosses.

A six-month study conducted by the Detroit News on the social status of children in the city of Detroit revealed that the majority are living in poverty. Nonetheless, Congress passed legislation last November that cut allocations to the Supplemental Nutrition Assistance Program.

A Jan. 30 Detroit News article about the study noted that “prematurity, whose deadly side effects include brain hemorrhages, collapsed lungs and failing organs, is the leading killer of Detroit’s babies. It’s the major component of infant mortality — a catch-all term comprising all conditions that claim children before their first birthday. Infant mortality is the No. 1 killer of Detroit children; violence is second. In 2011 alone, 130 of the 208 Detroit children who died that year had not yet marked their first birthday.”

Although poverty was mentioned indirectly, it was not emphasized as the major cause. The lack of universal health care, unemployment and racism must be taken into consideration when these types of statistics are reported.

The horrendous conditions prevailing in Detroit are mirrored, albeit on a lesser scale, across the U.S. While children are facing such grim prospects, women also bear the brunt of the capitalist economic crisis.

A study sponsored by Maria Shiver entitled “Women in America” found that the conditions of at least one-third of women in the U.S. are considered far less than desirable. These women are living in poverty, which has an enormous impact on their children and other family members.

In its article on the report, the Jan. 13 Time magazine noted:

3. “Two-thirds of American women are either the primary or co-breadwinners of their families.

The capitalist class and their allies in government offer no real fixes. The only solution to the rising problems of poverty and social deprivation is to fundamentally restructure the economic and social system under which people live. The wealth that is hoarded by a small percentage of the population must be taken and redistributed to the masses of workers, youth and the nationally oppressed.

People must be guaranteed a job or an annual income that would ensure their well-being. Everyone must be taken care of through programs that provide for adequate health care, food, clothing, housing and education.

The existence of poverty and economic exploitation should be outlawed amid the existence of wealth controlled by a small minority. Genuine income equality can only take place when the wealth that is produced by working people is shared collectively among them.