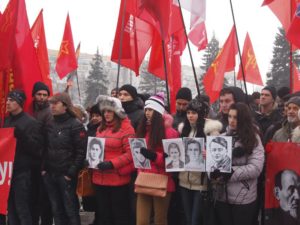 Young communists in Kiev carry photos of Komsomol resistance fighters executed by Nazis in occupied Ukraine 71 years before, on Feb. 8, 1943.

The Communist Party of Ukraine reported that more than 1,000 people joined the anti-fascist march in Kiev on Feb. 8.

“Most were young people who oppose the attempts to seize power by the neo-Nazi groups that have settled in the center of Kiev and captured the regional administration in Western Ukraine.”

The CPU reported that communists, their youth organization and others marched “under red banners with anti-fascist slogans and chants as they marched along central avenue Lenin to October Square.”

“Even the nightmare of our grandparents,” Zubchevsky continued, “who defended the country from invaders arms in hand, could not imagine that in 2014 a rematch of the fascist threat in Ukraine would become a reality, in a country that suffered the most from the Nazis during World War II.”

The demonstrators burned an effigy of Stepan Bandera, the idol of the nationalists and fascists, along with flags of the pro-fascist Svoboda organization that has been playing an ever greater role in the pro-European Union and pro-U.S. demonstrations in the Maidan, the main square in Kiev.