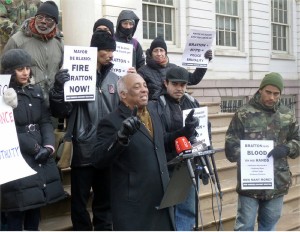 Activists, community members and families of police brutality victims held a news conference at City Hall on Feb. 4 to respond to claims by Mayor Bill de Blasio and Police Commissioner William Bratton that the problem of stop-and-frisk — the massive racial profiling program especially targeting Black and Latino/a youth — has been solved.

“Just this past Thursday, Mayor de Blasio announced that the Bloomberg-era appeal of the Floyd v. New York stop-and-frisk case would be dropped, allowing for a federal judge’s reforms to take effect,” said Josmar Trujillo of the ad-hoc coalition New Yorkers Against Bratton. “While those affected by racial profiling can credit the efforts of plaintiffs and lawyers in that case, the return of Bill Bratton undermines any celebration or proclamations that the NYPD has been reformed.

“Within the first month of Bratton’s return, New York has already seen a suspicious death in custody, a Latino student abused in Queens and an Asian senior citizen in Manhattan brutalized by the NYPD,” said Trujillo.

The latter victim, 84-year-old Kang Chun Wong, “was targeted as a direct result of de Blasio and Bratton’s ‘Vision Zero’ strategy, with a stated goal of eliminating traffic-related deaths. This is a rebranding of Bratton’s ‘Broken Windows’ policing philosophy that has targeted communities of color for years.”

Calling Bratton “the architect of stop-and-frisk,” public defender and activist Noha Arafa reviewed the NYPD commissioner’s long history of defending and promoting racial profiling, from his first stint in New York under arch-racist Mayor Rudy Giuliani from 1994 to 1996 to his recent heading of the Los Angeles police.

Arafa noted that while there is a widespread public perception that stop-and-frisk has ended, “I continue to represent clients every day who have been stopped and frisked. Nothing has changed.”

Greg Butterfield of the International Action Center addressed de Blasio as a parent. “Like the mayor, I have two biracial Black children, and I am horrified at the prospect of them, their classmates and friends growing up in a city where Bratton is police commissioner.

“The de Blasio administration is trying to paint a picture of Bratton as a reformer and proponent of civil rights,” said Butterfield. “But we know what the name Bratton means: racial profiling, police brutality and murder of our youth.”

Nicholas Heyward’s 13-year-old son Nicholas Jr. was killed by the NYPD when Bratton was commissioner in the mid-1990s. He said that parents and families of NYPD victims would be on the frontlines of the struggle to remove Bratton and “end the humiliation and terrorization of our youth by the police.”

Speakers said that stop-and-frisk is only part of the systematic police terror against the city’s people of color, which includes brutality, impunity for killer cops, sexual assault, criminalization of students in public schools, and spying and infiltration of Muslim communities, which Bratton championed in Los Angeles.

City Council member Inez Barron said: “Bratton has blood on his hands. We remember Anthony Baez, Anthony Rosario, Hector Vega and the other innocent young people killed by his NYPD.”

Carl Dix of the October 22nd Coalition said Bratton’s appointment represents the ongoing criminalization of youth, while former Council member Charles Barron added, “Bratton never should have been brought back, and he has got to go.”

When Mayor de Blasio and his entourage rushed past the assembled activists on his way into City Hall, they chanted their message to him loud and clear: “Bratton must go!”

For updates and upcoming actions, search for New Yorkers Against Bratton on Facebook.