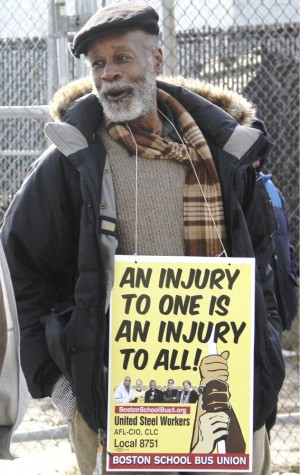 In the Boston working-class neighborhood of Dorchester, hundreds of labor and community leaders and rank-and-file workers jammed the streets Feb. 1 in front of the headquarters of one of the planet’s biggest conglomerate corporations, Veolia Transportation. Their voices, music and drumming filled the air with demands for “Union justice now!” and “Down with Veolia’s union busting!”

The outpouring was so militant that even the Boston Globe, Fox News and other mainstream media could not ignore it.

The protesters answered the call for Solidarity Day from United Steelworkers Local 8751, the Massachusetts AFL-CIO, the Greater Boston Labor Council, City Councilor Charles Yancey, the Black Educators Alliance of Massachusetts and dozens of community, labor and anti-war organizations to “Reinstate the fired leaders.”

Last June, the city of Boston deemed its new school bus management contract with Veolia “highly advantageous,” based on its promise to cut millions from drivers’ wages and benefits. In return, the city provided a unique, 50-cents-on-the-dollar kickback, a sweetener in “savings” to the company.

But when Veolia began shorting drivers’ pay and shredding the union contract in July, the drivers called it blatant union busting and fought back with 16 unfair labor practice charges and more than 300 grievances. Informational marches, picket lines, bulletins and daily yard meetings followed, which put Veolia on notice that Local 8751 would vigorously defend its members’ rights and 40 years of contract progress.

On Oct. 8, one day after the company posted across-the-board paycuts and demanded the drivers re-apply for their jobs, the workers showed up for work and demanded the company meet to address the contract violations. Instead, Veolia called the cops, locked the gates and shut down operations. Then on Nov. 1, Veolia terminated Andre Francois, Steve Gillis, Stevan Kirschbaum and Garry Murchison — four officers of the local’s progressive and organizational leadership. The vast majority of the nearly 900 rank-and-file immigrant workers are from Haiti, Cape Verde, Vietnam and Latin America.

The case of the fired leaders and the local’s struggle to defend itself from this imposed austerity became a rallying point on Feb. 1. Solidarity Day brought out school workers and educators fighting budget cuts and demanding equal, quality education; postal workers and community residents campaigning to save postal services; telephone, food, commercial and hotel workers, themselves fending off austerity and waging campaigns to organize low-wage workers at international corporations like Walmart and McDonald’s; anti-war and political activists drawing connections between wars abroad and oppression at home from Boston to Palestine; and civil rights and community leaders inspired by the drivers’ struggle against racism and for economic justice.

Solidarity grows due to struggle

To jump off the rally, Local 8751 militant spokeswomen, Chantal Casimir, Lela Rosboro and Kiett Baptiste, fired up the crowd. Bishop Felipe Texiera, a longtime labor and immigrant rights activist, called on Boston’s political leaders to support those who service the city’s children, not the 1% corporate elite.

Rich Rogers, from the Greater Boston Labor Council, came with the commitment of the 154-union federation to “Speak out against this injustice!” He said corporations that commit unfair labor practices are not welcome in Boston: “They have a responsibility to honor the union contract. The city is paying for that contract, and it’s wrong.” City Councilor Charles Yancey called for an in-depth council investigation into Veolia’s lockout and unfair labor practices: “We are not going to tolerate anyone disrespecting our workers, particularly those workers who transport our precious children every day.”

Steelworkers International Staff Representative Andrew Slipp called the drivers’ fight “a noble cause” and vowed the international’s full support until victory. Dumond Louis, president of Local 8751, laid out the members’ ultimatum: “Veolia has a choice, either get it right, or we will get it right for Veolia. We will ask the city to get rid of Veolia.”

Paul Kilduf, president of American Postal Workers Local 100 and a leader of the Coalition to Save Grove Hall Post Office, joined Ross Kiely, of Food and Commercial Workers Local 1459, in pledging their organizations’ resources and total solidarity to force Veolia to reinstate the fired leaders and defend the drivers’ contract.

Nancy Murray, from the Boston Palestinian Solidarity Committee, and Riana Good, from Jewish Voice for Peace, condemned Veolia for having run segregated buses in the occupied territories and dumping refuse of illegal Israeli settlers in the West Bank. The crowd cheered when they announced recent victories in the Dump Veolia campaign — from St. Louis to London to Richmond, Calif., to Massachusetts’ Jan. 8 decision to cut off Veolia’s $4 billion commuter rail contract.

Tony Yovo, fired by Veolia from his job as a SuperShuttle driver at Baltimore-Washington International airport, outraged and inspired the crowd with greetings from the mostly West African drivers, who are staging militant actions to stop what he called “Veolia’s wage slavery.” “We’ll be there!” was the overwhelming response to his request to bring Boston solidarity to Baltimore’s Workers Assembly on Feb. 15.

Former Roxbury City Councilor Chuck Turner reminded the crowd of Local 8751’s concrete solidarity with oppressed communities’ civil rights and justice struggles going back four decades. Peoples Power Assembly National Organizer Larry Homes captured the significance of the rally, stating, “All of Boston’s low-wage workers are inspired by this struggle. This is not just a Boston struggle or a U.S. struggle. We are in a global struggle against capitalism and austerity!”

Rally activists greeted Boston’s elder statesperson, Mel King, who waged a Rainbow Coalition campaign and nearly became Boston’s first African-American mayor in 1983, with rousing applause when the 85-year-old King surprised the crowd: “I could not not be here today. The school bus drivers have stood with us since 1974.”

Darrin Howell, a lead organizer of SEIU 1199’s low-wage workers campaign, called the crowd into the street for a march to Veolia’s barbed-wire-encircled office.

Bolstered by the marchers’ energy, other rally speakers included Johnnie McGinness, president of the Black Educators Alliance of Massachusetts, and Sandra MacIntosh, coordinator of the Coalition for Equal Quality Education, both of whom recognized the union’s historic role in fighting school segregation in Boston since 1974. They also commended the union’s efforts that helped defeat the 2009 resegregation “5-zone plan” and opposed the 2013 Boston Public School’s “walk to school” plan, which would deny students of color and poor whites access to the best schools outside their neighborhoods.

Litu Rep described intolerable conditions in U.S. retailers’ sweatshop factories in Bangladesh and condemned Veolia’s attempts to privatize water supplies there and throughout Asia. Vanessa Matamoros, from Boston Bolivarians, inspired the rally with greetings from Venezuela, where the people have elected a workers’ president, Nicolás Maduro, a bus driver and union organizer.

Emily Royce, noting the huge rainbow flag flying from the union’s sound stage, read a statement by Pride at Work, the national AFL-CIO organization for lesbian, gay, bi, trans and queer union members: “We want to let you know that we stand with you in your current struggle and will do whatever we can to make sure that justice prevails for all of you. USW Local 8751 has always been there when the LGBT labor community has needed you and when we still need you.”

Other speakers included Moonanum James, co-leader of the United American Indians of New England; Judy Rouse, from UNITE HERE Local 26; and Justin Eivers, from Veterans for Peace. Charles Clemmons, a popular radio commentator on Touch 106 and a strong supporter of the Local 8751, fired up the crowd. Three of the four fired drivers, Francois, Kirschbaum and Murchison, spoke. Gillis provided hours of sound from inside and outside his truck, which had been turned into a people’s stage with colorful signs.

Drivers and their supporters danced or marched back to the first rally site to a popular Haitian tune, whose words refer to the violent, U.S.-backed coup against elected liberation-theologist and Fanmi Lavalas candidate President Jean- ­Bertrand Aristide. They also proclaim the people’s determination to “chase out the coco rats for good.”

As the three-hour rally was winding down, Boston’s newly elected mayor Marty Walsh, a former state representative and head of Boston’s building trades unions, who campaigned with vocal support of Boston unions and progressive activists, issued his first statement about the conflict, which read in part: “I urge the parties involved to act quickly in this private matter to ensure that our students have reliable, safe transportation getting to and from school.”