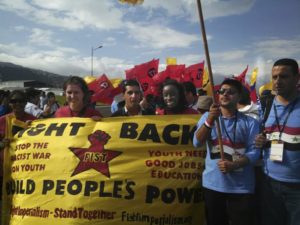 Quito, Ecuador — During the 18th World Festival of Youth and Students in Quito, Ecuador, the Ho Chi Minh Communist Youth Union of Vietnam held a reception and presentation. Beneath a large tent in Bicentennial Park, several hundred youth delegates from many countries listened to a representative of the youth organization, which is the official youth wing of the Communist Party of Vietnam.

This was one of many events at the WFYS, which drew more than 10,000 young people from at least 83 countries all over the world to discuss social struggles, share organizing strategies and enjoy each others’ company. Workers World Party sent a delegation of five comrades to the WFYS.

The Vietnamese youth’s opening presentation gave a history of Vietnam beginning with the fight against French and U.S. imperialism. The presenter described how the U.S. military dropped more bombs on Vietnam than were used during the entire Second World War. The Pentagon also used a deadly chemical weapon called dioxin against the Vietnamese people. The speaker described how, following the defeat of the U.S., the Vietnamese people were still forced to continuing fighting in Cambodia and the surrounding region, not securing peace until 1982. He said it would take more than 300 years to repair all the damage inflicted during the decades of war on Vietnam.

He emphasized that since the end of the war, Vietnam has taken great measures to improve the lives of the people. Poverty has been reduced to less than 5 percent, and literacy is now universal. Young children in Vietnam are provided free health care, and the country is working toward the goal of providing free universal education and health care for all.

“We are not yet a socialist country, but we are moving in that direction,” he noted. While capitalism exists in Vietnam, he stressed that it is closely regulated by the Communist Party and is used only to develop the economy so the country can move toward socialism.

Following the opening presentation, representatives from various Communist organizations around the world spoke in support of Vietnam. A rousing presentation given by an Indian communist ended with the chant, “Your name! My name! Viet­nam! Vietnam!” The slogan was commonly chanted at Indian demonstrations in solidarity with Vietnam during the U.S. war.

Representatives from the youth of the Communist Party of Peru and the Kim Il Sung Youth of People’s Korea also spoke. Many speakers expressed condolences on the recent death of General Giap, the Vietnamese military leader who led the people’s army that defeated first the French colonial army and then the U.S. military occupation.

Representatives of Workers World Party in the U.S. were asked to give remarks. Bao-Hanh Tran, from the Los Angeles Branch, spoke in both Vietnamese and English, describing the struggle to know the truth about Ho Chi Minh and his heroic fight against imperialism. As someone born and growing up in the U.S., Bao expressed pride in having Vietnamese heritage.

Caleb Maupin, of the New York City WWP Branch, raised the need for U.S. imperialism to pay reparations to the Vietnamese people. He emphasized that communists in the U.S. should work to link the struggles of U.S. workers with those fighting imperialism around the world. Pointing out that imperialism is the main enemy of all humanity, other WWP representatives wished the Vietnamese people success in constructing a prosperous socialist society.

An interview with Bao-Hanh Tran was conducted by a Vietnamese news agency, and her remarks were widely circulated in Vietnam.

More reports about the World Federation of Youth and Students will follow in future issues of WW. A video recording of part of the presentation by the leader of the Ho Chi Minh Communist Youth Union can be found at youtube.com/watch?v=v0sM2pBNCmk.