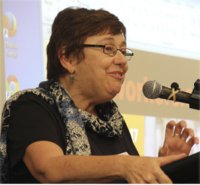 From a talk given at the 2013 WWP conference by Secretariat member Sara Flounders.

Next year is the 90th anniversary of Lenin’s death. It is the 100th anniversary of the start of World War I — the first imperialist conflagration, where millions died and tens of thousands died in a given day. The scale of destruction gave rise to a jump in consciousness, revolutionary upheavals and the first successful socialist revolution in Russia — led by Vladimir Lenin and the Bolshevik party.

Is Lenin’s analysis still an anchor for a revolutionary party? In the year ahead, we hope to revive the study of Lenin’s contributions, deepen it within the party and make it a basis of discussion within the left political movement.

Lenin’s many contributions on a revolutionary approach include:

1. On the national question, self-determination for oppressed nations and the importance of uniting the workers and the oppressed, important for the U.S., a country built on racism, slavery and genocide, truly “a prison house of nations,” to use Lenin’s formulation.

2. Understanding of the class essence of the state and its armed bodies. To bring about fundamental change, the capitalist ruling class must be overthrown; it can’t be done through a deal, a reform or an election.

3. Lenin spent his life building and explaining the need for the working class to have a revolutionary, disciplined, centralized and democratic party, its own fighting force.

4. Understanding imperialism — the ruthless monopoly stage of capitalism — when banks, major industries and the military-industrial-banking complex rule, and wars are inevitable as the capitalists compete to divide, redivide and loot the world.

Lenin said: “During a reactionary war a revolutionary class cannot but desire the defeat of its government” and “Hatred of one’s own government and one’s own bourgeoisie cannot be aroused unless their defeat is desired.”

This means seeing the world in terms of a continuing global class war. No area is off-limits to an increasingly desperate U.S. imperialism. Imperialist wars are fabulously profitable for a handful of the largest corporations.

The political establishment and its military machine use every weapon and commit every crime. The Pentagon’s National Security Agency spies on the whole world. The Pentagon fires killer drones and uses assassination, secret rendition and torture on a massive scale, and no longer even keeps it secret.

The U.S. imposes starvation sanctions, political destabilization and economic sabotage on any country not totally controlled by Wall Street. Though no crime is beneath them, the imperialist war machine is less and less able to prevail, which makes them even more dangerous and reckless!

In September, the U.S. was willing to risk world war, pulling in Russia and Iran, to impose regime change in Syria. With no political movement and no big demonstrations, this new war seemed unstoppable. We were one of the few voices opposing U.S. attacks on Syria. The social democrats were silent. The Democratic Party was for the war. Whole parts of the left were confused and silent, duped by the demonization of Syria.

But this war plan ran up against new subterranean developments in the world and here in the U.S. working class. When President Obama proposed a war vote in the U.S. Congress, a groundswell of opposition overwhelmed every congressional office in the country with thousands of messages, calls and visits, all opposing another war. In four days there were anti-war demonstrations in 100 cities.

Some 89 percent of the population here opposed another war. They knew it would be disastrous. The sentiment was far ahead of the organized movement.

A crisis of the system can create revolutionary potential. Consciousness is changing. It is reasonable to combine opposition to imperialist war with economic struggles.

Combined Syrian, Iranian, Lebanese, Russian and Chinese resistance forced the U.S. to back down from an all-out strike on Syria. But it was increasingly obvious to millions of people here that the system can’t provide and won’t provide for their most basic needs.

A peace concluded by imperialists can only be a breathing spell before a new war. The war threats on Syria continue through U.S. proxies: Israel and Saudi Arabia.

We need to be on the alert. The “pivot” to Asia reflects U.S. imperialism’s concerted effort to assert its influence. There will be new threats on north Korea and a renewed stranglehold on the Philippines.

As working-class revolutionaries, we must think and strategize on how to build the unity of our class on a new basis and yet maintain a revolutionary focus. The challenge for us is to raise demands that are focused and understandable and continually mobilize against the crimes of this most vicious, racist and dangerous imperialist ruling class.