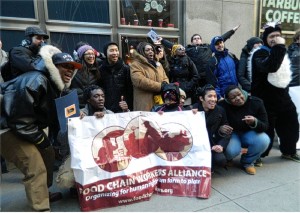 UNITE HERE Local 100 rallied to support restaurant workers seeking union recognition at Junior’s in Brooklyn. In spite of the rain, some workers spoke at the rally. The average pay for these workers, mostly men of color, starts at $9 an hour at the famous establishment. Protesters chanted, “Hey Brooklyn, what you say? Local 100 is here to stay!”

Restaurant Opportunities Center NY members gave a Wendy’s boss in midtown Manhattan a letter urging support for the Coalition of Immokalee Workers, who pick tomatoes in Florida. The letter also demanded that Wendy’s recognize CIW’s Fair Food Program. ROC representatives were asked to leave this fast food exploiter while a strong multinational picket line outside demanded justice for the CIW. Later, pickets left with the chant, “We’ll be back and we’ll be stronger, we won’t take it any longer!”

Other protests targeted Darden’s Capital Grille on 42nd Street, Brandworkers in Queens and Starbucks. Protesters were organized by ROC NY, Brandworkers and the Food Chain Workers Alliance, among other organizations.