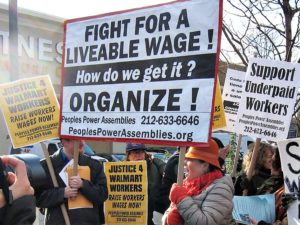 Challenging corporate greed, low wages and the anti-worker policies at Walmart, people organized and held protests at Walmart stores around the U.S. on “Black Friday,” Nov. 29. The busiest shopping day of the year in the U.S., it is a critical day for retail outlets to make as much profit as possible off the labor of their low-paid workers.

OUR (Organization United for Respect) Walmart reports that at least 1,500 Walmart stores were hit with demonstrations on Nov. 29. Many of these protests around the country were initiated by concerned individuals and unions, who responded to a call from OUR Walmart for protests that day. Some of these protests ended in the arrest of protesters who refused police orders to disperse.

In South Philadelphia, protesters handed out fliers, chanted, held signs and talked to customers at the local Walmart.

About 250 people protested outside of a Walmart in Secaucus, N.J. Thirteen protesters were arrested when they sat down in the street. The Rude Mechanical Orchestra kept up the spirit of the action, which was strong and militant.

Two busloads of people came from New York City, while a number of others drove and some came by public transportation. Along with OUR Walmart, organized groups included OccuEvolve, People’s Power Assembly and NY Community for Change, along with Food and Commercial Worker union ­organizers.

Two protests were held Nov. 29 in Greater Cleveland, one in the morning on the city’s west side and another in the afternoon in the east side suburb of South Euclid. The first was hosted by Marjorie Chambers, vice president of United Auto Workers Local 1005, and joined by other UAW members and members of the Teamsters, Steelworkers, Cleveland Federation of Teachers and other unions. Chambers joined the second protest, hosted by Service Employees member Fran Mentch. At the second protest participants marched into the Walmart, leafleted customers and workers, and made a statement to the manager.

Elsewhere in Ohio, in Dayton and Cincinnati, Black Friday protests were preceded by one-day walkouts on Nov. 18. Walkouts also occurred earlier in such cities as Chicago, Los Angeles and Seattle.

Close to 100 people picketed outside of the Towson Walmart near Baltimore on Nov. 29. The protest was initiated by the “We Deserve Better” Workers Assembly in support of Walmart Workers. The assembly has launched a statewide campaign for a $15 minimum wage.

UFCW Local 27 sent a contingent of supporters who helped lead chants. Postal workers from Community and Postal Workers United helped the group put up a 12-foot banner. Students from Johns Hopkins University, the University of Baltimore and the University of Maryland, Baltimore County attended, along with civil rights activists Dr. Marvin “Doc” Cheatham and the Rev. Cortly “C.D.” Witherspoon.

The largest number of people who protested, however, had never before participated in a demonstration. They were moved to make this their first protest based on their anger at how Walmart treats its workers.

Sharon Black, a representative of the Workers Assembly, told Workers World, “We were very encouraged by the incredible support witnessed by the numbers of people who came out on a holiday weekend. This is especially remarkable given the recent court injunction filed against protesters and the huge show of force by police.” Black was referring to a court injunction levied in Maryland, Florida, Arkansas and Texas against protesters entering Walmart parking lots and stores.

Walmart on ‘wrong side of history’

Withstanding pouring rain, protesters in Los Angeles demanded that Walmart provide a living wage for its employees. By the main entrance to the store, a flatbed truck blaring music and speakers targeted the anti-worker, anti-union labor policies of the retail giant. Surrounding the truck were hundreds of activists, union members, clergy, immigrant rights and other progressive organizations, including the International Action Center and Workers World Party. An IAC banner stating “Support Walmart Workers’ Strike, Living Wage Now” received lots of media attention and was featured in the Los Angeles Times coverage.

“History always shows that when you are on the wrong side of history you will eventually lose, and Walmart is on the wrong side; the workers will win their demands and more,” IAC activist Maggie Vascassenno told Pacifica Radio’s KPFK during an interview at the protest.

About 200 protesters came out to support Walmart workers in Hayward, Calif. Five people were arrested in a civil disobedience action when they blocked an intersection.

Kim DeFranco reports in fightbacknews.org that in St. Paul, Minn., “Around 500 people took to the streets at the Midway Shopping Center here, Nov. 29, chanting, ‘Poverty wages have to go!’

“People marched through the shopping center, which brought the protest to the front doors of Walmart. A striking Walmart employee stated that not only do they work for low wages at the store but they are continually disrespected and harassed by management. The march continued into the streets, passing other stores and restaurants chanting, ‘Wal-Mart, Wal-Mart you are no good, treat your workers like you should!’ while onlookers cheered and honked horns. Once the march entered an intersection, people circled around, blocking traffic. The St. Paul police gave warnings to disperse but all stayed. About 30 people were arrested.”