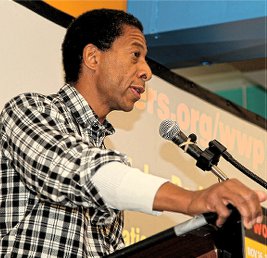 Talk given at WWP conference by John Parker.

Every nation in the Middle East fighting imperialism will have victories and losses, but regardless of the missteps, the various interpretations of socialism and Arab nationalism, the various degrees of working-class empowerment and international solidarity — one can’t deny the essential role of Syria in defending the region against imperialism since Syria’s independence in 1946, and especially in continuing that resistance to this day. Not only has Syria historically held back the U.S. cop in the region — Israel — but today the Syrian people and their government are helping to thwart the most dangerous threat to humanity today: U.S. imperialism.

Yet, when the latest crisis of war against Syria began, we witnessed little solidarity here by organizations calling themselves anti-war or even Marxist or communist, with the exception of the United National Antiwar Coalition. Maybe one or two would lend support on paper or digitally over the Internet — but they seemed preoccupied with the fear of being seen as too supportive of Syrian President Bashar al-Assad and refused to come out to protests. Why? Because of the demonization that was so overwhelming and came from seemingly everywhere all at once — whether it was from CNN, Fox, the New York Times, the Washington Post, BBC, the Guardian or Al-Jazeera.

Without someone knowing one fact, when you mention Syria you get the inevitable response, “But isn’t Assad a brutal dictator?” Well, how brutal are the crimes by U.S. presidents, responsible for the killing of millions not just once but in almost every U.S. war from the Philippines, North Korea, Vietnam, Afghanistan, Iraq and Libya. I didn’t even mention Hiroshima and Nagasaki, and death by destabilization, starvation or drones in Indonesia, Sudan, Congo, Yemen, Somalia and Pakistan. And don’t forget to count the lives lost in this country due to social programs sacrificed on the altar of the military-industrial complex to pay for these wars.

U.S. imperialism is the greatest purveyor of violence and the root of most violence in the world today. The key to stopping war and state violence is to stop U.S. imperialist war, not encourage it.

How much do we know about Syria’s government? A People’s Council is elected by universal suffrage of citizens at least 18 years old. It’s made up of two major coalitions — the National Progressive Front made up primarily of socialist and communist parties, and the Popular Front for Change and Liberation. This particular council was the result of elections in 2012, where seven additional parties were added to the once sole party — the Arab Socialist Ba’ath Party.

Negotiations with representatives of opposition groups brought about changes to the constitution that included the elimination of the martial-law-like emergency decree. It established the requirement that half of the parliament or People’s Council be made up of workers and peasants; it mandated that major economic industry remain public property in the interest of the Syrian people as a whole, not Western banks and interests; and finally, that Syria remain in “the forefront of confrontation with the Zionist enemy and the bedrock of resistance against colonial hegemony on the Arab world and its capabilities and wealth.” That’s in the new constitution that was negotiated with the nonrebel, nonmercenary opposition forces and ratified in 2012.

It is no coincidence that in 2011, while these negotiations were taking place, the violent U.S.-sponsored rebel war began, halting the continued progress being made by the nonrebel opposition with the government. And, as the increased rate of reforms was being implemented, so increased the rate of violence by the so-called rebels.

Solidarity and the National Question

Regarding solidarity, the work nationally of Workers World Party and the International Action Center reverberated all over the country.

Vladimir Ilyich Lenin wrote that to repudiate the self-determination of nations fighting imperialism would be a theoretical error rendering involuntary support to the most dangerous chauvinism and opportunism of the “Great Power” nations. A primary task of our party is to be in solidarity with the latest victim of U.S. imperialist attacks.

At protests against war on Syria, many of the Syrians would bring pictures of Assad and this became the issue and point of departure for some. Not for us. Our job was to do what we could to win over the anti-war movement that was on the fence or too afraid to come out. Our job was to provide facts the anti-war movement needed to feel stronger about adopting an anti-imperialist position, not to tell the Syrians how to protest.

The Syrian community was extremely courageous to protest when their country was being so vilified. A massive attempt was in progress here to isolate and threaten anyone who dared to protest. All of it was in the context of racist violence and state repression against Arab people here. As we were able to attract more people from the anti-war movement, it allowed a safer space for those most targeted by U.S. repression.

Lenin’s guidelines regarding the national question and fightback against imperialism were formed, developed and refined through the living, day-to-day struggles. Our Marxist party continues to use these principles to fit our day-to-day actions. That’s how we’re going to build a Workers World.