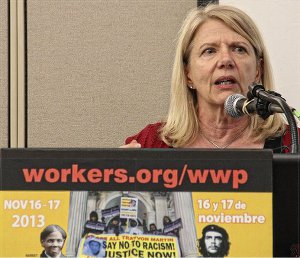 Talk given at the WWP conference by Sharon Black.

The new low-wage workers movement is really a movement in embryo form that is taking on the global problem of fighting low wages. In some parts of the world, like Bangladesh, the workers are way ahead. They have been engaging in revolts to raise the minimum wage.

There’s a lot of debate going on about the Service Employees International Union and Fast Food Forward. Are they doing the right thing in their organizing drives? But I would submit that the biggest problem for the low-wage workers movement is arousing and engaging the entire working class, not just because it’s so needed for its success but because a huge section of the working class is low wage.

The recent studies show that 50 percent of the working class makes less than $15 an hour. People are poor! What Sam Marcy said in “High Tech, Low Pay,” that capitalism has impoverished the working class, is now a full-blown global phenomenon.

The Workers’ Assembly is a vehicle that can help us fight this phenomenon on an independent class basis. There were earlier forms. The Million Worker March was an example.

Uniting the working class as a class

Baltimore brought a wonderful delegation of people from the workers’ assembly there.

We have a great delegation of American Federation of Government Employees workers. It’s a myth that federal workers are well-paid and privileged. The truth is that a vast majority of them are poorly paid — they are mostly, Black, Latino/a and women. Why should they be fighting against government shutdowns and furloughs alone and isolated? Why shouldn’t they stand together with the postal workers, who are fighting another form of austerity?

Look at the [Boston] school bus drivers. Why should a brave union like this stand alone against an international corporation with global tentacles around the world?

Why shouldn’t the workers fight as an entire class on a global basis?

That is what a workers’ assembly has the potential to do — to unite and elevate our demands on a political basis. We have not maximized this or fully succeeded, but it illuminates the potential for the assemblies.

Take the issue of police killings and mass incarceration. The union movement has finally begun to address this in small ways. A good resolution on mass incarceration was passed at the 2013 AFL-CIO convention [in Los Angeles]. This is something the working-class movement has to take on — not just the bread and butter issues, but also the important political and social issues like racism, mass incarceration and unemployment that affect the entire working class.

Organizing problems for this present period

I come from an older generation. When I was 18, I was able to get a job in a garment factory, later in an auto plant, and then for 17-plus years I worked at a food processing plant. The terrain which my generation struggled in, which could be described as the traditional union movement, was easier.

When I was younger, you could get up and shut the whole plant down. You could exercise working-class power. But it’s much harder now for younger workers.

Capitalism at this stage has atomized workers in a way previously unheard of. Workers can be anywhere — in smaller workplaces, spread out. They could be in India or Los Angeles, in Burger King or hidden in a warehouse or working behind a computer. It makes it harder to organize.

It shows that you have to develop new tactics, new strategies and the workers’ assembly can be one of them that enables the working class to come together and exert its power.

We are now in the greatest jobless capitalist recovery in history — a recovery that is for the bosses — and joblessness and misery for over 30 million people, most of them youth. This crisis is a departure from the past boom and bust cycles of capitalism, where workers returned to the economy when there was a recovery.

Young people are now facing a system where they may never work . It’s not only true in this country — especially for the most oppressed youth — but for the entire world.

I am so glad that Larry Holmes raised the issue of a “Jobs, not jails” youth march. For a number of reasons, we didn’t get a chance to raise a proposal like this to the national AFL-CIO convention. But it doesn’t mean we can’t revisit it. The unions have the resources, the buses and all that’s needed to help the unemployed, underemployed and low wage youth.

While talking about the workers’ assemblies, we need to take the union movement up on their call for inclusion with the community. We need to go to the state and city AFL-CIO councils and see where we can participate and where we can raise this proposal.

Sharon Black ended her remarks by calling on participants to not only build people’s and workers’ power, but explained the need to build Workers World Party. She also referred to the Cuban revolution’s use of the thousands of workers’ assemblies which provided working-class democracy to the workers.