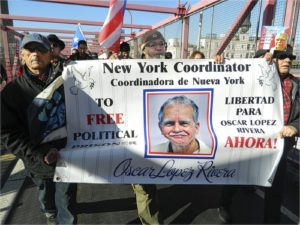 More than 200 people marched across New York City’s Williamsburg Bridge Nov. 23 to demand freedom for Puerto Rican political prisoner, Oscar López Rivera. The 70-year old Rivera has already spent 32 years in federal prison, five years longer than Nelson Mandela’s time in apartheid jails. The Community Coalition for the freedom of Oscar López Rivera organized the march that coincided with a march of 50,000 in San Juan, Puerto Rico. Among the speakers at the concluding rally were representatives of the Sundiata Acoli Freedom Campaign, Malcolm X Grassroots Movement, newly-elected Councilperson Antonio Reynoso and René Pérez Joglar from Calle 13 who called for the independence of Puerto Rico. — Stephen Millies

There are some crucial issues that unite the Puerto Rican people beyond any material possession. It has been demonstrated several times throughout history. The most recent examples were the struggle against the U.S. Navy in Vieques, which successfully kicked out the hated Pentagon, and the mass outpouring for the funeral of Macheteros Commander Filiberto Ojeda Ríos, viciously assassinated by FBI agents in his home.

And in the mid-1970s, a similar campaign to free political prisoners Lolita Lebrón, Rafael Cancel Miranda, Irving Flores and Andrés Figueroa Cordero took place uniting, as the Campaign to Free Oscar is doing today, the people regardless of their political affiliation. It is a demonstration of national pride that says to the imperialist forces: Enough!

Even if it is not consciously acknowledged, the meaning of this united front is the quest for sovereignty. How dare the U.S. keep one of our own imprisoned for 32 years, just for loving his country and wanting it free! López Rivera was never convicted of harming anyone.

U.S. Congresswoman Nydia Velázquez said it bluntly during a press conference on Nov. 23: “President Barack Obama, how can you go to Egypt and talk about the unity of the people of the Middle East, when here in the USA we have a Puerto Rican in prison for loving his country?” The demand is to President Obama to sign a presidential order to free him.

Many international personalities have demanded the freedom of Oscar López, including Desmond Tutu in South Africa and Rigoberta Menchú in Guatemala. In Puerto Rico, the voices that demand his liberation come from all sectors: politicians, artists, workers, students, athletes, businesspeople, religious leaders, LGBTQ activists, physicians, lawyers, intellectuals and others, including ex-governor, Aníbal Acevedo; current governor, Alejandro García Padilla; and several mayors. At the recent Latin Grammy Awards Ceremony, Puerto Rican singer Ricky Martin shouted after his performance: “Freedom and Justice for Oscar López!” showing the demand written on the palm of his hand.