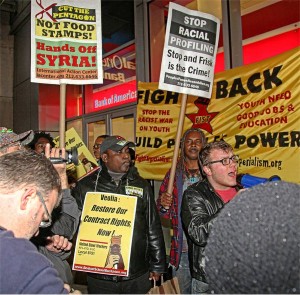 During the conference, FIST led a March for People’s Power against union busting, racism, austerity and low wages.

Bao-Hanh Tran, who traveled from Los Angeles to attend the conference, told Workers World: “I think the socialist analysis Workers World Party offers is a great antidote to the nonsense and lies I was given in high school and on TV. I came all the way to NYC for this conference from LA because I really believe we can make change through this organization!”

The youth of Workers World Party organized the second plenary session of the conference titled “The Trayvon Generation: What’s next in the post-employment economy under the new Jim Crow.”

The session highlighted the changing consciousness among young people in this period of austerity, the intensified war on youth of color, and the struggles that youth are taking up to fight back. Q Wideman, a leading organizer of North Carolina high school students, opened the plenary with a spoken-word piece about the school-to-prison pipeline. Tachae Davis from Detroit, Caleb Maupin from New York and Eva Panjwani from Durham, N.C., all spoke during the session.

Throughout the weekend, the revolutionary youth organization Fight Imperialism — Stand Together (FIST) played an active role in all events at the conference.

FIST had issued a special appeal to youth to attend the conference and helped organize caravans from many parts of the country.

Danielle Boachié, who came with a FIST delegation from North Carolina, summarized the sentiments of many who were there, telling Workers World: “As an immigrant, I heard all the time about how great life was or would be in the United States. But since living here, I’ve seen that’s far from the truth. I’m a feminist blogger, and I’m here because I want to go beyond writing and into action and organizing.”

During lunch on Saturday, FIST hosted a standing-room-only breakout discussion with more than 50 young people ready to do just that. They discussed the struggles happening in different parts of the country, the issues that most impact youth in their areas, what are the attitudes of young people toward revolutionary politics in each of their regions, and how to better coordinate organizing by revolutionary youth across the country. The breakout discussion resolved to find ways to be in more regular communication with one another after the conference and build FIST chapters in their areas, where possible.

FIST also organized a March for People’s Power that took place immediately after the close of the conference on Saturday night. The march stopped by significant targets in midtown Manhattan — the New York City corporate headquarters of the racist, union-busting, global corporation Veolia, a Bank of America office and several fast food restaurants.

Members of the Boston School Bus Drivers, Steelworkers Local 8751 joined FIST and other conference participants on the march and spoke at the offices of Veolia about their ongoing struggle against the company and the fight to reinstate the five leaders of the union who are under attack.

Members of Liberate CUNY joined FIST at the Bank of America office to speak about the ongoing struggle around the CUNY 6, student loan debt and resistance against bank-imposed austerity in Detroit. At the fast food restaurants, the march expressed solidarity with low-wage workers’ ongoing struggle to win $15 an hour and a union.

Without a doubt, the young people, and all who attended the conference, left with renewed revolutionary spirit. They will be bringing it back to the struggles they are engaged in throughout the country to build FIST, Workers World Party and the fight for people’s power.