The following resolution was passed unanimously on Nov. 17 at the national conference of Workers World Party. It grew out of a workshop on waging a campaign against the criminal, transnational conglomerate Veolia, which is attempting to bust the Boston School Bus Drivers Union, Steelworkers Local 8751. 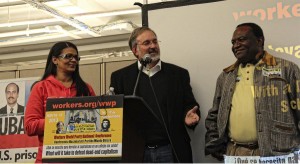 Leaders of the Boston School Bus Drivers Union, Kiette Baptiste, Stevan Kirschbaum and Andre Francois, as well as all the Local 8751 members present received standing ovation at the conference.

Whereas the Boston School Bus Drivers Union Steelworkers Local 8751, is comprised of hundreds of mostly Black and Brown immigrants who have, since the local’s founding in 1976, been closely linked to Boston’s communities, especially its many communities of color, through the children whom they care for daily on their way to and from school;

Whereas over the last 37 years Local 8751 has shown class solidarity with many local, regional, national and international workers’ and community struggles — including the current struggle to stop the resegregation of Boston’s schools, as well as many struggles against war, racism, sexism, anti-LGBTQ bigotry, and all forms of oppression and exploitation – which provides a living example of social unionism that should be emulated by the entire labor movement;

Whereas Veolia has since it took over management of Boston’s school bus system in July 2013 consistently and willfully violated numerous terms of Local 8751’s contract, which were detailed in a complaint filed in September with the National Labor Relations Board;

Whereas Veolia’s sudden illegal lockout of Local 8751 on Oct. 8 and the subsequent firing of four leaders of the union — who are responsible for carrying out all activities that benefit union members, including defending the contract — must be viewed as a racist attack on an exemplary union and an outright attempt to bust the union in order for the city to proceed with its plans to resegregate Boston’s school system;

Therefore this national conference of Workers World Party resolves: That Grievance Chair Stevan Kirschbaum, Vice President Steve Gillis, Recording Secretary Andre Francois and Steward Garry Murchison be immediately reinstated as school bus drivers so they can resume their elected offices and continue to serve the rank and file of Local 8751;

And be it further resolved: That Workers World Party will organize a national educational campaign, including fact sheets, demonstrations, forums and social media, to expose Veolia’s criminal, anti-social activities, including its history of bribery, corruption, embezzlement, contempt for workers and their unions, environmental destruction, profits from the illegal and inhuman Israeli occupation of Palestine, and privatization of public services through its energy, water, transportation and environmental divisions.

And be it further resolved: That Workers World Party will build a broad coalition with other unions and environmental, faith-based, social justice and community groups, both in the U.S. and around the world, to internationalize the struggle against Veolia as a prime example of greedy, ruthless, global monopoly capitalism that seeks to impoverish and tyrannize all peoples around the world.