Workers. Youth. Detroit. Boston. These are now in the forefront of the consciousness of many of the political activists who attended this year’s Workers World Party annual national conference. It was a life-changing experience. Not just the words, but the electric atmosphere sparked early in the Nov. 16-17 weekend meeting here in New York. More than 300 attended from 20 states and dozens of cities. 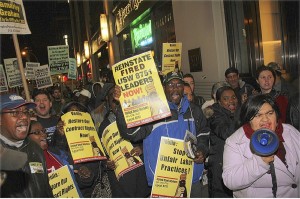 As the party prepared to grapple with strategy for this period of dead-end capitalism, Boston school bus unionists arrived. In the midst of their own life-and-death struggle against the Veolia transnational monopoly, a busload of Boston school bus drivers, mainly of Haitian and Cape Verdean origin, walked into the meeting hall to the cheers and shouts of the hundreds of participants, many of them young people attending their first WWP conference.

When Veolia’s management and Boston officials attacked some Steelworkers Local 8751 leaders and baited them as WWP members, it seems unlikely they had in mind strengthening solidarity between the union and the party. But that’s what happened. The drivers listened attentively to a Marxist analysis of the capitalist crisis.

At the end, conference participants approved a resolution to battle Veolia wherever possible and help the union defend its leaders and win.

From Garrett’s introduction Saturday morning to the open-mike session on Sunday, participants could hear and feel the change in consciousness of the working class. Youths, themselves in low-paid and insecure jobs, described their own moment of realization that the U.S. “American dream” had turned into their nightmare of abuse, racism, sexual harassment and job loss — and led them to commit to a life of organized class struggle.

Minutes after the bus drivers filled three rows of seats at the front of the hall, the delegation from Cuba’s U.N. Mission arrived. This sparked another round of cheers. WWP and its friends have felt close solidarity with socialist Cuba since the Cuban Revolution first confronted U.S. imperialism.

As Ariel Hernandez Hernandez, first secretary of the mission, described Cuba’s measures to defend its socialist gains against the U.S. blockade, cheers and chants of “Free the Cuban Five” and “Cuba sí, bloqueo no” filled the room and set the mood for the conference. 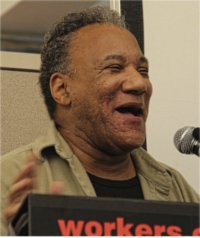 The first session’s presentations had a double task: Not only explaining how and why a global civilization is decomposing, but also opening discussions about strategies to mobilize the working class to fight to overturn the system. Talks from this and other sessions will be excerpted in this and future issues of WW and published online.

Secretariat member Fred Goldstein presented a Marxist analysis of the concentration of service workers, now a majority of the working class, in low-paid, non-union jobs in giant chain stores that place workers experiencing similar pay and conditions in close vicinity of each other and to organizers.

First Secretary Larry Holmes, who examined the overall deteriorating economic conditions for workers in the U.S. and worldwide, urged participation in the movement of low-wage workers, specifically to support a Dec. 5 strike action already in motion. Holmes’ address will be published in the next issue.

Abayomi Azikiwe explained how Detroit had become the prime example of the banks’ move to pillage the cities.There the ruling class is using ongoing bankruptcy proceedings to transfer more billions from the workers to the banks. The Moratorium NOW! Coalition is calling for a mass demonstration outside the federal court on Dec. 10 to demand rejection of a deal with Barclays Bank.

WWP Secretariat member Teresa Gutierrez discussed the impact of the crisis on migrants in the U.S. since the splendid upsurge of 2006 and that year’s May Day general strike. With 2.5 million deportations since President Barack Obama took office, hundreds of thousands of arrests and continued militarization of the U.S.-Mexico border, a new leap in consciousness is taking place among migrant youths. Some have even voluntarily taken arrests in order to enter massive detention centers to organize migrant workers.

WWP Secretariat member Monica Moorehead, who chaired the opening plenary, paid tribute to USW 8751, the Boston School Bus Drivers Union. A founder of the union and grievance committee chair, now fired, Stevan Kirschbaum both explained how Veolia had broken the contract and led the crowd in singing union songs. His and the other school bus drivers’ presentation of Veolia’s union-busting tactics and their fightback drew angry chants of “Veolia must go!” and pledges to defend the fired unionists and get their jobs back.

A break-out session during lunch to discuss tactics to confront the transnational giant and win the struggle in Boston drew more than 100 participants. The session, which included remarks by Local 8751 Vice President Steve Gillis, produced the conference resolution to stand with Local 8751.

FIST and the ‘Trayvon generation’

The youth organization, Fight Imperialism — Stand Together, or FIST, was put on the map. New York’s Caleb Maupin reviewed the anti-imperialist struggle history of WWP and Youth Against War & Fascism in an earlier generation of youth activists. Detroit’s Tachae Davis and North Carolina’s Eva Panjwani brought that spirit of struggle to 2013. Colleen Davidson from Baltimore chaired, and Q Wideman of NC Heat performed her own poem.

That this second plenary title spoke of the “Trayvon generation” showed the youth’s focus on the fight against racist killings by cops and others, “stop-and-frisk” and the “school-to-prison pipeline.” FIST’s program also defends women’s and lesbian-gay-bi-trans-queer rights and the struggle of migrant workers — where young people are now taking the lead. These struggles will be integrated with the fight for jobs at a living wage.

Putting these words quickly into action that Nov. 16 evening, FIST led a march and demonstration to a nearby Veolia headquarters, a Bank of America office and a McDonald’s restaurant to protest union busting, the robber banks, police brutality and low wages.

A third plenary took up establishing popular organizations independent of capitalist political parties that combined community and labor struggles. Under discussion were the People’s Power Assemblies and Workers’ Assemblies.

Peter Gilbert from North Carolina described the assault by the rightist Tea Party, which has monopolized the state government and launched attacks on workers and nationally oppressed people in the “right-to-work” (for less), anti-union state.

WW managing editor Kris Hamel discussed how to point the way toward socialism by raising transitional demands that the capitalists are sure to reject, such as “Take it from the banks, not city workers” in her city of Detroit.

Guest speaker Joe Iosbaker, of the Freedom Road Socialist Organization, targeted three years ago by a repressive federal grand jury, raised the need for continued solidarity, at this time with Rasmea Odeh, a Palestinian woman arrested Oct. 22 in Chicago for having been jailed by Israeli occupiers 45 years ago.

WWP managing editor LeiLani Dowell, who chaired, discussed developments in Honduras and WWP’s solidarity with the resistance movement there that formed after the 2009 coup. Its candidate in the coming presidential election is leading in the polls. The next day guests Lucy Pagoada and Celina Montes from that movement addressed the conference.

On Nov. 17, an open mike allowed both seasoned communists and new activists an opportunity to respond to the points raised at the conference or relate their experiences in the class struggle. Tova Fry from the Bay Area and Imani Henry from New York chaired.

The closing session, chaired by Dianne Mathiowetz from Atlanta, included an analysis by WW editor Deirdre Griswold of the circumstances surrounding the 1963 assassination of President John Kennedy. She explained that a coverup of the role of the far right continues to this day and reviewed WWP’s work in helping organize an independent investigation at that time.

Larry Holmes appealed for people to join the party as new political leaders are sorely needed for the struggles sure to arise in the near future.

Participants at the conference approved both a resolution of international solidarity and one of solidarity with USW Local 8751.

The conference opened with rousing singing by Pam Parker, accompanied on guitar by Richard Miller, and closed with the entire conference singing “The Internationale” in English and Spanish, along with a chant demanding freedom for political prisoner Mumia Abu-Jamal.

The conference was live-streamed on the Internet.